The FD Podcast Series 1 Episode 17 – Oliver McBride speaks to Patrick Murphy of the ISWFPO on the Tie-Up Scheme and the Seafood Sector Task Force (SSTF).

In this podcast, Oliver and Patrick examines the issues with tie-up schemes; the loss of markets and fishing grounds to foreign fishing, and the Seafood Sector Task Force; was it realistic that it could examine all the issues the Irish fishing industry has in a space of nine-months?

What is the immediate future for the fishing fleet and how long before the Irish fishing industry has disappeared from around ports around our coasts?

Ireland has already been pushed into previous scrappage schemes by the EU. Will things be different this time?

Reports coming from the Seafood Sector Task Force set-up by Minister for Agriculture, Food and the Marine Charlie McConalogue in response to Brexit and the detrimental UK-EU Trade and Cooperation Agreement fallout, are pointing towards accepting the inevitable end to fishing in rural Ireland that the EU Commission is forcing upon the country.

The Seafood Sector Task Force is set to recommend another round of decommissioning to the Minister in its report but Irish South and West Fish Producers Organisation (IS&WFPO) Patrick Murphy believes that this is not what should be happening, and instead the Minister, backed by the government, should be seeking increases in quotas for the fleet, taken from the existing paper fish given to France and other EU member states that fish in our waters.

Nearly fifty-years of membership of the European Project has taken Irish fishing from a high to the lowest point ever experienced by any fishing nation in the world, outside of the collapse of the Cod stocks on the Grand Bank.

Traditional fishing families stand to be driven out of their rural communities and into large towns and cities to make way for remote office workers, Airbnb owners and weekend holiday homeowners, who buy their coffee from the back of a horsebox on the pier or at the entrance to a beach when they’re out and about.

Traditional fishing grounds will have to make way for multinational companies building offshore wind farms. Inshore fishermen are being pushed out of bays as the government drives to expand aquaculture and marine protected areas swallow-up the remaining areas to fish.

It’s not only the fishing sector that gets hit. There are the jobs in processing plants, jobs in logistics and exporting jobs. The money that is earned gets circulated in those communities. Schools close, shops close and young people leave.

How has the Irish fishing industry and the people who depend on it arrived at this point?

Why has there never been an Irish government that has backed the industry and what do they get out of it when they don’t back it?

Thank you for listening. 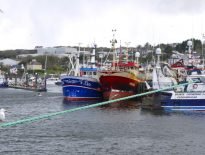