.In the video documentary, producer and presenter Sea Moroney claims that the Irish Fish Processors sold out the Irish Fishing Industry in order to become the big winners by grabbing €90 million investment money from the Brexit Adjustment Reserve Fund (BAR).

In the podcast interview, Brendan Byrne denies the allegations made by Sean Moroney in the video documentary saying that the editing of the hour long interview he held in Killybegs had been manipulated to fit Moroney’s conspiracy theory.

He said that the Irish processing industry was fully being the fishing industry despite what was shown in the video documentary. In his interview with our Editor, he discloses the full story of what was said in the Seaview Hotel.

The podcast examines Brendan’s relationship with the Taoiseach and Oliver asks, “Why has the Taoiseach not come out to publicly back the fishing industry when he has backed the tech sector, the agriculture, etc?

Oliver asks, is there a deal in place where Irish processors will be buying fish from Spanish owned fishing vessels in Castletownbere? There are no plans in place says Brendan.

Brendan also talks about the damage that The Fisher’s Voice has had and the possible fallout from it. At the very least, he claims, that it has undermined all the hard work and achievements that the industry has gained through the flotillas in Cork and Dublin respectively.

Oliver asks if the Seafood Sector Task Force was loaded in favour of the processing industry, a question Brendan refutes.

So where next for the relationship between the fish processors and the fishing industry? Can the trust be rebuilt? Will we see the fish processors and fish producers working together again on a united front, or has the Fisher’s Voice been successful in doing what the Department of Agriculture, Food and the Marine have been trying to do for decades now?

Update: Following this FD Podcast, The Fisher’s Voice removed the video from their Facebook Page 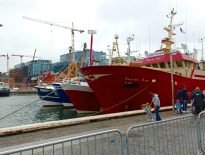 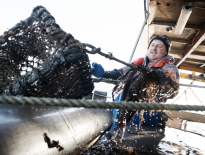