Decommissioning in the Irish Fishing Fleet and the Atypical Working Scheme

by The Fishing Daily Podcast

Oliver McBride speaks to Patrick Murphy of the IS&WFPO on the proposed Voluntary Permanent Cessation Scheme and the Experiences of non-EEA workers in the Irish Fishing Industry Report.

The outcome of the Seafood Sector Task Force Report is another round of decommissioning for the Irish fishing fleet whilst other EU Member States will not be affected by any cuts in fishing powers.

Oliver and Patrick discuss how this has come about and what offers are on the table for fishermen wanting to get out of the business.

Patrick says that the SSTF Report does not offer anywhere near the value of what is recommended to be culled from the fleet and more needs to be offered if they are serious about the offer.

What will another round of decommissioning mean for coastal communities? We have seen the devastation that was created by previous decommissioning to coastal harbours such as Burtonport in Co Donegal and other harbour right around the country.

Burden sharing – will the EU give Ireland what they are entitled to, and the review of the Common Fisheries Policy, more hot air or will it lead to actual reform?

We also examine the Department of Agriculture, Food and the Marine’s handling of kW fishing hours. Have they been underselling kW hours in swap scenario?

How can other EU countries get ten times the value of kW hours for the same tonnage swap in Irish waters?

The podcast also examines the report from Maynooth University entitled “Experiences of non-EEA workers in the Irish Fishing Industry” which was funded by the International Transport Workers Federation (ITF).

Patrick looks at the Atypical Working Scheme on which non-EEA workers are brought into Ireland. He says it is not fit for purpose because it was created without the involvement of the fishing industry and that it needs reform to protect non-EEA workers or boat owners alike.

Decommissioning in the Irish Fishing Fleet and the Atypical Working Scheme 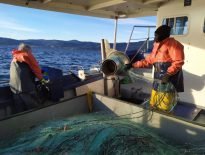