The Irish fishing industry has been put through the mill over the past two years between Brexit and COVID-19. There is little sight of green shots appearing and now the Russian invasion of the Ukraine has put pressure of the food production sector as fuel prices rocket.

In the nearly nine-months since the flotillas in Cork City and Dublin City, the ISW&FPO have seen their campaign to keep the Irish fishing fleet intact ripped apart by recommendations from the Seafood Sector Task Force Report published in November has called for a 30% reduction in the whitefish fleet; a reduction Minister for Agriculture, Food and the Marine, Charlie McConalogue TD, says the EU Commission is calling for, but yet the EU Commission and DG MARE has told The Fishing Daily that they have not. Who is telling the truth and who is lying?

Irish waters has now been handed over to The Department of Housing, Local Government and Heritage in a move that has demoted the Department of Agriculture, Food and the Marine. Fishermen will not have a say in where offshore windfarms will be built, that is the reality. The great swindle of the Irish fishing industry continues as fishermen are robbed of traditional fishing grounds. How did this happen?

The Control Plan is in chaos again. A seemingly universally received plan by fishermen, fisheries control authority, and Government Minister has been canned by someone. Who is responsible?

And who is responsible for the position Irish fishermen find themselves in when French boats can land fish caught in Irish waters unchecked by the SFPA, into the backs of Spanish lorries an disappear off to the Continent. What has gone wrong and when will the madness end?

All this and more is examined in this episode of The Fishing Daily Podcast.

Listen to find out more … 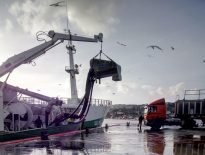