The Fishing Daily Podcast Season 3 Episode 01 – Dr Tom Pickerell of the North Atlantic Pelagic Advocacy Group (NAPA) speaks with Oliver McBride, editor of The Fishing Daily, about the outcome of the NEAFC talks and pelagic fisheries in the northeast Atlantic for 2023

The coastal states of the North East Atlantic Fisheries Commission (NEAFC) have been making advances in talks which have been welcomed by the 60 strong membership of the North Atlantic Pelagic Advocacy Group (NAPA).

The coastal states consisting of the EU, UK, Norway, Iceland and Denmark (Faroe Islands and Greenland) have agreed to a reduction in the mackerel catch limits for 2023 which will be set at 782,066 tonnes, a reduction of -1.62% from the 2022 advised catch limits.

Tom says: “Starting with mackerel, the the advised catch from ICES advice was pretty similar to their advice from the previous year. It was only a 1.6% reduction, however, because the actual total allowable catch that was set in 2022 greatly exceeded the ICES advice. If we were to adhere to the scientific advice, we would be looking at a 31% cut.”

On Atlanto-Scandian Herring, the was also a reduction on the catch limit advice from ICES which was 511,171 tonnes for 2023 and the agreement was reached between the EU, UK, Norway, Iceland, Denmark (Faroe Islands and Greenland) and the Russian Federation. Although the UK refused to sign the same agreement as the Russians, due to the Russia’s illegal invasion of Ukraine, they did sign the agreement on a seperate document.

On this Tom says: “For Atlanto-Scandian herring, it’s about a 4.6% reduction to the catch advice. Again, there was no agreement in 2022 for Atlanto-Scandian Herring and the actual total catch that was declared was I think 827,000 tonnes. So that’s a 38% catch reduction that would be needed to follow the scientific.”

Blue whiting catch limits was agreed between the EU, UK, Norway, Iceland and Denmark (Faroe Islands and Greenland) which will see a massive increase in quota of 81%. The agreed catch limits are in line with the ICES advice of over 1.3 million tonnes for 2023.

Tom says that the actual catch for blue whiting in 2022 was around 1.1 million tonnes which was over the ICES advice of over 752,000 tonnes.

Tom says: “That would give an opportunity for a 23% increase in terms of what the scientific advice says and what the catch was the previous year.

Should be worth noting that the improvement in blue Whiting has nothing to do with well managed fisheries.

It’s to do with unprecedented levels of recruitment into the fishery.

“Regardless of what it is, it it’s good news because it gives the fisheries managers a lot of them to manoeuvre on Blue Whiting. So we were very hopeful to see constraint brought into this, because people could still take a percentage cut to adhere to the scientific advice, but not actually see real term catch reductions.”

Tom discusses the importance of applying scientific advice and balancing it out in order to achieve the best result for the producers, processor and consumers. Larger catches of stocks can lead to a glut on the market and ultimately prices can crash.

They also discuss the recent NEAFC talks, and Oliver asks if there is a maturing in the relationships between the coastal states, and Tom explains the next steps in the process before fishing arrangements are finalised for 2023.

NAPA has added several new members to the organisation in 2022 and has become a global group and Oliver asks what is on the agenda for 2023. 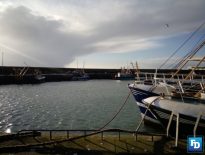 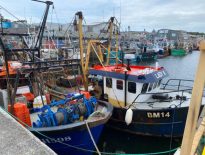