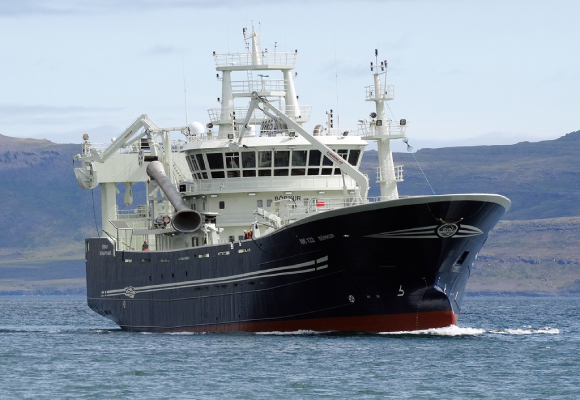 The fishmeal factories are working to capacity according to Síldarvinnslann hf as their pelagic vessels targeting blue whiting in the Grey Area south of the Faroe Islands step up their landings.

Last Friday morning the Bjarni Ólafsson AK brought 1,800 tonnes of blue whiting to Neskaupstadur and the vessels skipper Runólfur Runólfsson spoke to the Síldarvinnslann website saying that the fishing is going well.

“We caught this catch in four hauled and towed for 10-18 hours. The largest haul yielded 640 tonnes, but the smallest was short and taken at the end to top of the tanks and it was only 250 tonnes.

“The fishing took place on the Thomson ridge in the grey area south of the Faroe Islands. There is a lot of fish to be seen there in spots. The fishing is mostly from evening until the following morning, but during the day it is much smaller.

“There is a lot of traffic. Icelandic ships are there and many Russians. There are also some Faroese vessels in these areas, but some of them are north and east,” explained Runólfur.

According to Eggert Ólafur Einarsson, factory manager in Seyðisfjörður, Hákon EA was expected on Friday night with 1,650 tonnes of blue whiting. The factory in Seyðisfjörður will start processing as soon as raw materials are landed.

Some of the largest landings so far this season has been the Börkur NK docked in Seyðisfjörður with 2,250 tonnes and Beitir NK is landed over 2,900 tonnes.

The blue whiting at this time of the year will be turned into fishmeal as the oil content of the fish is lower than earlier in the year.

The blue whiting fleet is currently operating on grounds called the Grey area which is located south of the Faroe Islands and to the north of the Shetland Islands. Fishing is reported to be tight between the boats as the blue whiting are along a narrow stretch. Both the Icelandic and Faroese Navy are present in the area. 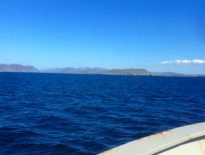