A Northeast Atlantic survey found that the whale population in the area to be approximately 600,000. Photo: Mink Whale – NOAA

A five-year survey carried out in the Northeast Atlantic between 2014 and 2018 found that the whale population in the area to be approximately 600,000.

According to researchers’ estimates, there are approximately 600,000 whales, large and small, in the area, which includes the North Sea, the Norwegian Sea, the Jan Mayen area, the Barents Sea, Svalbard and the area east of Greenland and north of the Faroe Islands.

There were 571 records of large whale sightings. Of these, 298 were identified as fin whales, 94 as sperm whales, 98 as humpback whales and 10 as blue whales, 2 as sei whales, 5 as bowhead whales, and 64 were categorized as ‘unidentified large whales’.  There were 980 sightings of small odontocete groups.  Of these, 46 were identified as killer whales, 435 as harbour porpoises, 461 as dolphins, 27 as northern bottlenose whales and 11 as pilot whales.

While survey coverage was acceptable in most areas, ice coverage hampered efforts in the northernmost regions of the study area, reducing the survey area coverage by 2.6%. This is similar to past surveys and should not have a large effect on overall abundance, as these species are not expected to aggregate in ice covered areas.

In addition to providing information for the management of whaling under the RMP, the survey in 2015 also contributed to the synoptically conducted North Atlantic Sightings Survey (NASS). In collaboration with the North Atlantic Marine Mammal Commission (NAMMCO), survey blocks around Jan Mayen were added to the planned 2015 survey to create continuous survey coverage from areas around Iceland extending north to the Jan Mayen region and westward covering the Norwegian Sea. The areas to the south and west of Jan Mayen were surveyed simultaneously by three Icelandic and Faroese vessels. 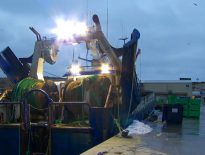