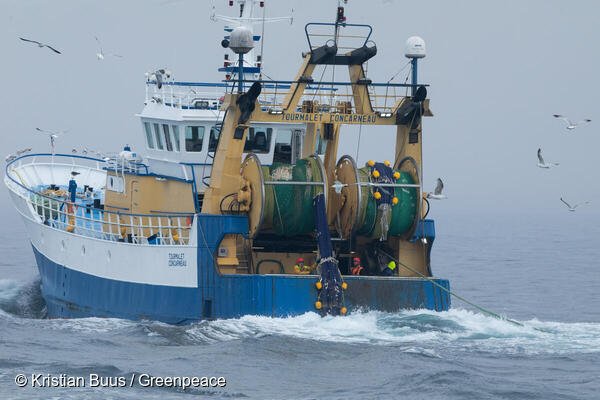 Greenpeace, fishers and fishing businesses have come together to declare a state of emergency in the English Channel and Southern North Sea

Greenpeace, fishers, anglers, charter skippers and fishing businesses have come together to declare a state of emergency in the English Channel and Southern North Sea.

Fishing groups from Eastbourne, Hastings, Thanet, Newhaven and Lowestoft, along with the New Under Ten Fishermen’s Association (NUTFA), New Economics Foundation, Angling Trust, fishing businesses Sole of Discretion and Pesky Fish and Greenpeace, have signed a joint statement calling for the UK Government to take urgent measures to protect fishing communities and our oceans.

Fishers along the south and east coasts have had their livelihoods devastated after years of unchecked industrial fishing by pulse trawlers, supertrawlers and fly-shooters. This has severely depleted fish populations, particularly in inshore waters, leaving some local fishers with nothing left to catch. Less than one third of key UK fish populations are in a healthy state.

Supertrawlers, all of which are EU owned, spend thousands of hours fishing in UK waters annually, including in marine protected areas. Supertrawler fishing times in UK marine protected areas increased by 1000% between 2017 and 2020. Industrial fly-shooters began focusing operations on UK waters off the south and east coast following the electric pulse trawling ban. Fly-shooting is a highly efficient industrial fishing method with immense catching capacity, which poses a threat to fish populations and the seabed.

“It’s really quite simple, the small scale coastal fleet that the government has sworn to protect is now forced to watch their present and future livelihoods being destroyed in front of their eyes, firstly by the huge fleet of powerful EU owned fly-shooters that inexplicably have had all catch limits removed for their target species, and secondly, by massive EU midwater trawlers reducing the resilience of stocks in the Channel to the impact of climate change whilst threatening dolphin and porpoise populations. Tragically, it appears to be only Greenpeace that has been willing to lend its political and practical weight in defence of our coastal fishermen and communities.”

“We’ve been at sea all summer bearing witness to the destruction taking place in the English Channel and nearby waters. We’ve worked closely with local fishers, and when you’re on the water with them, it’s very clear; our fishing communities are at breaking point. They won’t survive much longer without urgent action from the government.

“Fishing communities, anglers, charter skippers and environmental groups alike support these measures which will be an important step towards fully protecting at least 30% of our oceans by 2030. We hope that by coming together to fight for the same thing, our government will finally start taking practical steps towards delivering this goal. If these requests are ignored, it’s clear that ministers are siding with the multinational fishing companies who are wrecking our oceans, instead of the local fishers who are the backbone of our coastal communities.”

John Nichols, a local fisherman in Ramsgate, said:
“My name is John Nichols. I’ve been fishing since August, 1972. We’re a shrinking fleet here. Now, we’ve got 18 vessels in Ramsgate. We’re down to probably 14 of those being reasonably active or active. 10, 15 years ago, we was twice the number. They’re dropping out, not because they want to drop out, but because the quota and what’s available is such that you struggle to earn an honest living.”

This comes as it has been revealed by a Greenpeace investigation that one third of the membership of the UK’s largest industrial fishing lobbying group, the National Federation of Fisherman’s Organisations (NFFO), is made up of European fishing companies. This group has lobbied against supertrawlers being banned from marine protected areas.

Graham Doswell, a fisherman in Eastbourne, said:
“I’m a third-generation fisherman. Been fishing on the Sussex coast all of my working life and it’s been really good. Great fun probably up to the last, I don’t know, 10 years or so. And it’s gradually got harder and harder. I think unless something really, really drastically is done I think it’s going to be difficult for everybody to carry on making a living. We were all keen to get sort of Brexit done and we were promised everything that would make a difference to us, but unfortunately, we were absolutely sold down the river and none of the promises that were made to us were ever carried out.”

The joint statement calls on the UK government to act with an urgency that reflects the state of emergency facing fishers along the south and east coasts of England.

These measures would boost catches for local fishers, revive coastal communities and provide space for marine ecosystems and fish populations to recover from years of devastation by industrial fishing. This would also be a vital step towards the UK government delivering its target of protecting 30% of the UK’s and the world’s oceans by 2030.

A Joint Statement: State of Emergency in the English Channel and Southern North Sea

English fishermen, together with local fishing businesses, Greenpeace UK, Angling Trust and New Economics Foundation are calling on the UK government to take immediate and urgent action to protect coastal livelihoods and the health of our oceans.

The UK’s oceans and coastal communities are in crisis. Just one third of our fish populations are in a healthy state. Industrial fishing vessels like supertrawlers and fly-shooters have immense catching capacity and are pushing marine ecosystems and fish populations to the brink of collapse, leaving local fishermen with nothing left to catch.

Greenpeace has been working with local fishermen all summer to document the destruction of the UK’s seas by industrial fishing. When you’re on the water, it’s very clear: our fishing communities – especially in the English Channel and Southern North Sea – are at breaking point.

Without urgent action, our oceans will be damaged beyond repair and our fishing communities won’t survive. The government has used new post-Brexit powers to ban electric pulse trawling, a perfect example of what is possible when there is political will. Australia banned supertrawlers like the Margiris from their waters over 5 years ago, but the UK has continued to let them fish here.

The government has not properly assessed the environmental impacts of fly shooting, yet such vessels are licenced to fish in UK waters and Defra has removed all catch limits for fly shooters targeting non-quota species for 2021. This fundamentally conflicts with the precautionary objective in the Fisheries Act (see definition below).

That’s why we, England’s local fishermen, anglers, charter skippers, local businesses, Greenpeace and New Economics Foundation, call on our government to protect our oceans and fishing communities – beginning with the following measures:

Additional steps must also be explored to support fishermen operating within the 6 – 12 nautical mile zone in both the English Channel and Southern North Sea, in light of the threat posed by large scallopers and large beamers.

We must seize this once-in-a-generation opportunity to save our oceans and our fishermen.

Definition of the precautionary objective in the Fisheries Act 2020:

The “precautionary objective” is that—

(a)the precautionary approach to fisheries management is applied, and 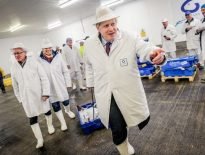 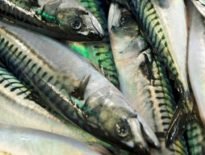