Out of the 9 topics discussed, 4 resolutions were adopted during the Indian Ocean Tuna Commission (IOTC) meeting that took place in Seychelles from May 16 to 20.

The 26th session of IOTC adopted a management procedure for bigeye tuna that will allow for the first time to set a total allowable catch in 2024. This proposal from Australia was co-sponsored by the EU and other countries. The adoption of catch limits for bigeye tuna marks a new milestone in the history of IOTC.

This proves that Regional Fisheries Management Organisations (RFMOs) can apply modern harvest strategies for tropical tuna species based on the best science. IOTC also takes measure to improve the observer coverage, tightens monitoring and control rules on at-sea and on-port tuna transhipments and is the first RFMO adopting a Resolution on Climate Change.

Regarding yellowfin tuna, despite all the efforts from European Union and Seychelles, most of the objecting parties – Oman, India, Indonesia, Iran, Madagascar and Somalia, whose catches represent 40% of the IOTC yellowfin catches – did not join the efforts of others and still refuse to apply the reductions imposed by the management plan of 2021. No consensus was achieved either on skipjack tuna: “The European Union and Maldives had both proposed to limit the catches of skipjack to comply with the Harvest Control Rule adopted in 2021. However, while the EU made a step forward, increasing catch limitations on the main harvesters but alleviating the burden on least developed countries, Maldives made a step backward, proposing even more drastic reductions solely addressed to the EU fleet to relieve all other countries of any effort, including the eight other main harvesters. Too many contracting parties (CPCs) where unwilling to accept any limitation,” regretted Anne-France Mattlet, Europêche Tuna Group Director.

Similarly, the European Union proposal on fishing aggregated devices (FADs) would have been the most ambitious ever adopted in IOTC, allowing a better scientific analysis of the data transmitted by the buoys but unfortunately, no consensus was reached.

Those two major topics might be debated again in future intersession meetings. Other major improvement proposed to the monitoring and control system were not so lucky. EU proposals to establish an inspection scheme in the high sea and to improve mandatory statistical reporting requirements were firmly rejected. Anne-France Mattlet is confident: “We are convinced that the European Union and Seychelles’ teams will keep on proposing improvements on monitoring, control and surveillance issues and find a way to get support from other CPCs to address these major issues.”

Europêche Tuna Group appeals to the responsibility of the objecting countries on the interim rebuilding plan for Indian Ocean yellowfin tuna, to lift their objections, and look for compromises at the IOTC negotiation table. 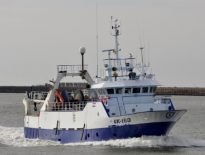