Pelagic stocks in the North-East Atlantic is a vital food source with many coastal states benefitting from the abundance of species such as mackerel, herring and blue whiting.

Understanding where these stocks come from, what they feed on, where they breed and where they migrate is of vital importance to manage future fisheries and the International Council for the Exploration of the Seas (ICES) helps our understanding of these essential fish.

​​Several ICES expert groups focus​ on understanding ecosystem functioning as a vital part of integrated ecosystem assessment, including the Working Group on the Integrated Assessments of the Norwegian Sea (WGINOR).

Established in 2013, the group began by identifying major components of the physical environment and the biological environment. This included compiling data of current status and changes over time and perform​ing quantitative analyses of time series searching for trends in ecosystem status over time.

The Norwegian Sea is a highly productive temperate ecosystem with a strong seasonal pattern in productivity. Three fish stocks dominate the pelagic zone, utilising the high summer productivity for feeding and generally migrating to other areas during their overwintering and spawning season – Norwegian spring-spawning herring, blue whiting, and Northeast Atlantic mackerel. While all three stocks are ​fished by many nations, Northeast Atlantic mackerel is the most commercially important.
Mackerel is a widely distributed and highly migratory stock, their north-to-south distribution boundary ranges approximately from 78°N to 36°N in the North Atlantic. Their migration cycle is characterized by feeding in the northern part of their distribution (centred on the Norwegian Sea) during summer and autumn and spawning in the southern part from January to July, south of the Norwegian Sea.
From the mid-2000s, large changes have been observed in mackerel summer feeding distribution. Prior to this, mackerel summer feeding distribution was limited to the Norwegian Sea (east of longitude 10°W and south of latitude 72°N), the North Sea, and the shelf west of Scotland. From the mid-2000s to the mid-2010s, their feeding distribution range expanded west towards the coast of Greenland, by approximately 1650 km and north towards Svalbard by approximately 400 km. Simultaneously, the stock’s centre-of-gravity has shifted northward and westward. During July 2014, distribution range peaked when measured as 2.5 million km2. 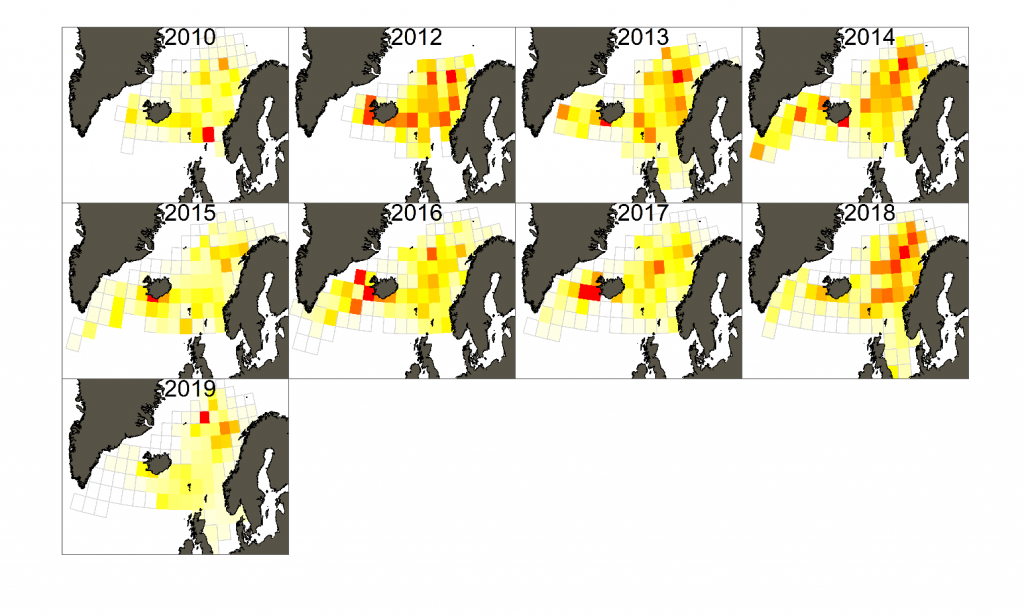 From 2014 to 2019, the distribution range has retracted, specifically in the westward expansion area (longitude > 10°W), as the westward boundary retracted from the east coast of Greenland (longitude 44°W) to the west coast of Iceland. Retraction of the westward area coincided with the centre-of-gravity shifting towards the northeast, locating it east of Jan Mayen in 2019. During the International Ecosystem Summer Survey in the Nordic Seas research survey in July 2019, mackerel distribution range in the westward expansion area was limited to shelf areas southeast, south, and southwest of Iceland. The distribution range was the smallest measured excluding the first year of the survey in 2007.

The expansion of mackerel distribution has resulted in international disputes over sharing fishing opportunities. New nations have entered the fishery following the expansion of mackerel into their exclusive economic zones, creating conflict with traditional mackerel fishing nations. The dispute has not yet been solved and mackerel is fished above the advised amount.

The expansion in mackerel’s summer distribution range was concurrent with the more than doubling of stock size. Directions of expansion were constrained by availability of preferred temperature (9–13°C) preventing mackerel from expanding into the cold polar waters of the Greenland Sea and instead expanding westward, in warm Atlantic waters, along the south coast of Iceland towards Greenland. Mesozooplankton abundance​ within habitats of preferred temperature was also a factor in mackerel distribution.

Distribution retraction in recent years coincides with a declining stock size but is not concurrent with changes in temperature or prey abundance. It is not understood why mackerel distribution in the westward area has drastically retracted compared to mackerel distribution in the Norwegian Sea. In 2019, temperature in the westward area was within the range preferred by mackerel, mesozooplankton abundance was similar or higher compare to years when ​mackerel was abundant in the area, and estimated spawning stock size had only declined 16% from peak abundance in 2014.

Further research on the unpredictable changes in mackerel summer feeding distribution is part of WGINORs current work. During the next few years, WGINOR will research the intrinsic details of mackerel seasonal migration movements, focusing on understanding the ​role of social learning, bioenergetic, and somatic condition of individuals. The research is a part of a project called “Strategic initiative for harvesting: Sustainable multi-species harvest from the Norwegian and adjacent ecosystems” which is funded by Institute of Marine Research​, Norway. The international scientific network of WGINOR provides a platform to expand a national research project to an international venue which is important given the wide-ranging distribution of mackerel. Hopefully, better understanding of marine ecosystems and their intrinsic variability will create knowledge useful to solve international disputes such as the current one about the​ sharing of mackerel fishing opportunities. 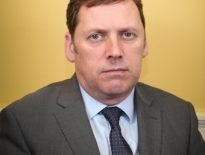 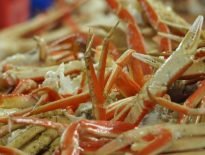