Castletownbere Harbour Master, Cormac McGinley has responded to concerns from locals in regards to the policing of the harbour area.

The disquiet started after an incident which happened last Sunday, 10 May whe the ‘Insua de Area’ a Spanish-registered fishing vessel was photographed by several people tied-up in what was reported as a non-designated landing area in the harbour.

Over the past four days, two further foreign fishing boats, the French-registered ‘Melodie’ and the ‘Cap Finistere’ were photographed in the same area of the harbour.

Locals in Castletownbere were concerned the Harbour Authority was not checking that these vessels were being compliant to the COVID-19 protocols put in place by the Minister for the Marine after blockades in Dingle, Co Kerry and Castletownbere itself in late March of this year. In response to the blockades, the Minister authorised the setting-up of designated landing areas for foreign vessels in harbours.

It was thought by the Department of the Marine that these areas would help relieve tensions and allow foreign boats to continue landing without interference.

At the start of this month, Castletownbere was put on high alert again after a French-flagged Spanish-owned longliner, the ‘Notre Dame Cedeira’ was reported as having returned home to the Port de Celeiro, where the skipper and eight of a crew has tested positive for COVID-19. The fishing vessel had offloaded in Castletownbere on 21 April but none of the crew had reportedly left the boat.

The Fishing Daily had written to the Harbour Master on Monday and acknowledges the receipt of his reply. Mr McGinley apologised for the delay in getting back to us as he was on sick leave and explained what occurred on Sunday, 20 May.

In his reply he said “Depending on the vessels and restrictions on space on the quay wall the covid 19 restriction area is liable to change from day-to-day.

“My assistant has been on top of this situation from the start of the restrictions and is doing a trojan job under very difficult times.

“The said vessel did discharge in the COVID-19 restricted area. After discharging she developed engine problems and did not know if she would be tied up for the night. She was instructed to move to another area which was also restricted from the public.  She subsequently solved the engine problem and sailed that night.” 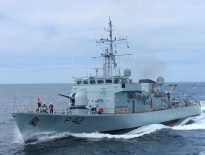