Brim hf has reported this week that their fishing fleet is not hitting the blue whiting shoals like they were expecting based on previous years experiences.

“It hasn’t been bad, but there’s no heavy fishing. There aren’t any fish on the grounds, and we can’t rule out that the blue whiting could be migrating further to the east than in previous years, and could be by-passing us,” says Theódór Thórðarson, skipper of the 81 metre pelagic trawler ‘Venus’ NS 50.

“We have reports of fishing for blue whiting to the south of us in Scottish waters, and we’re hoping that they’re simply on the move later than we’re used to seeing,”said the Brim skipper.

This time ‘Venus’ had 2,700 tonnes of blue whiting in its tanks.

“We had this fish in eight tow, and the largest haul was 510 tonnes. Towing time is 15 to 20 hours, and this is work that calls for patience. We are mostly towing on the ridge at the southern end of the Faroese EEZ and the blue whiting are often at 300 to 400 metres. Marks are often poor and a lot of the time we’re towing on the dust we see on the sounder. Occasionally there’s strong marks that show up, but in general the blue whiting seem to be very dispersed,’ explains Thórðarson, commenting that there are few reports of any fishing further to the north and closer to the Faroe Islands.

“We heard a few days ago that two boats had been fishing well on the Monk Shallows, but the amount wasn’t that much that there would have been enough for more trawlers to be fishing there.”

Theódór Thórðarson commented that there are hopes of livelier fishing and added that at this time last year there was very good fishing further north, closer to the Faroes.

“There are a few boats that have dropped into some heavy fishing. But in general, it has been pretty slow and I hope that indicates the migration is later than usual. We’ll find out over the next few days,” Theódór Thórðarson said.

Brim hf will be hoping that they will soon make a big hit on the blue whiting shoal. 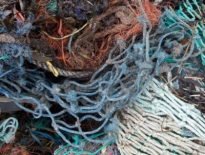 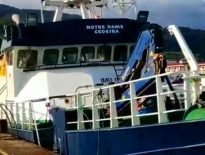