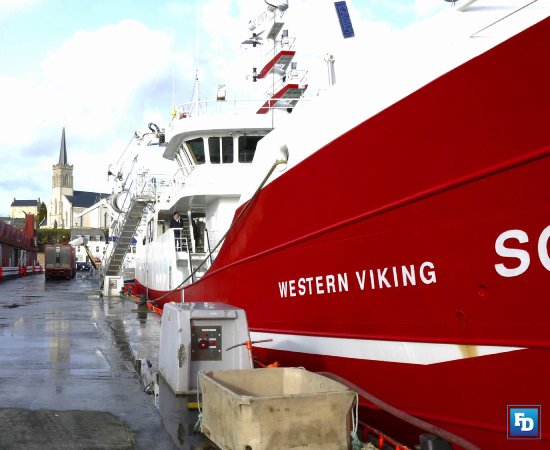 The SFPA’s method of weighing pelagic catches is “Water is Being Weighed as Fish” says EAPO President, Pim Visser

Pim Visser, President of the EAPO has written to the DG-MARE, Director Charlina Vitcheva on the EAPOs position in regards to the Commission’s current regulations on weighing landings.

One particular case the EAPO singles out, is the issue fish processors in Ireland are encountering with the Sea-Fisheries Protection Authority (SFPA) when it comes to weighing pelagic landings.

The EAPO President has called the DG-Mare to re-examine the current regulations in relation to the weighing of pelagic species as  he believes they are not accurate.

The EAPO challenged the SFPA’s system of weighing fish and refrigerated water claiming “ This is a totally inaccurate way of working as water is being weighed as fish.”

Last week, the SFPA told The Fishing Daily that it will continue with the current system of weighing and refuses to use the exemption allowing for weighing pelagic species in the processing plant over the fully calibrated flow scale with cameras.

“Instead, the SFPA insists on weighing the specialised transport tankers over a weigh bridge as part of the 5% and 7.5% full monitoring requirements,” says the EAPO.

The SFPA claim that by deducting 2% of the weight to allow for the refrigerated water this results in an accurate method of calculating pelagic landings but last week six Irish fish processors; the Killybegs Fishermen’s Organisation, the Irish Fish Producers and Exporters Association, the Atlantic Dawn group, Arctic Fish, Norfish and Gallagher Brothers all based in Killybegs told The Sunday Business Post that they were taking the Authority to the High Court after some processors lost last quota earlier this year due to this method of weighing which has been introduced in Killybegs.

“The fisheries in the EU are regulated and operate at a continental wide level. Fishermen fish in the EU waters and land their catch in the port they find is appropriate (in relation to the fishing ground distance, their market destination, and other factors).

Currently specific examples exist where fishermen face challenges to use this provision. In Denmark the regular process of landing in ports before transporting fish to its first sale location in another Member State, and then weigh it as it is unloaded from the sealed truck, is no longer allowed since 1 April. This has an impact on the quality of the goods, and thus the first sale price. It also generates unnecessary costs for producers and affects the production and marketing planning. This stems from the fact that Common Control Programs of Denmark with other Member States seem to be hampered by the Commission.

Furthermore, the Covid-19 crisis has stricken the sector hard in economic terms and in reaction to market closures, some fishers have been looking for new markets, landing their catch where they did not use to and in some cases Common Control Programmes are not in place.

The Common Control Programmes have to be initiated and agreed between the two member States, approved by the Commission. To address the above mentioned negative consequences EAPO calls for a more flexible approach to weighing at landing, so that this can continue to be substituted by using logbook data, transport documents, sealing of transports and weighing at point of first sale. This includes an expeditious adoption of common control programmes where necessary. As the control regulation is being revised, the Commission seems reluctant to consider some Common Control Programmes. However, this poses a threat to the fisheries sector where a proportion of the products are landed abroad from their first sale market.

In addition to this cross-border issues, in Ireland, the pelagic fishing industry endures the continuation of domestic problems. It faces difficulties where the control authority, the Sea Fisheries Protection Authority (SFPA), refuses to use the exemption allowing for weighing pelagic species in the processing plant over the fully calibrated flow scale with cameras. Instead, the SFPA insists on weighing the specialised transport tankers over a weigh bridge as part of the 5% and 7.5% full monitoring requirements. This is a totally inaccurate way of working as water is being weighed as fish. This is not in accordance with the requirement in the control regulation to accurately weigh the landings.

The current COVID-19 crisis has highlighted these underlying issues around weighing and common control programmes. EAPO finds that it is of paramount importance that the current regulation is applied correctly and asks that DG MARE’s Unit, responsible for control, pays specific attention to the cases listed above in order to quickly allow solutions for a workable landing process.”