UK Landings Quantities and Values have decreased overall due to COVID-19.

UK landings quantities and values in fishing ports right around the coast have been hit by the COVID-19 crisis as witnessed by the recent Statistics.

Coronavirus started to have an impact on the fishing industry during March 2020 when the total quantity of reported landings by the UK fleet was 61,000 tonnes, -15% lower than March 2019.

In response to the impact of COVID-19 on the UK fleet, the Marine Management Organisation (MMO) has introduced a new monthly publication to include more timely information on fishing activity.

Additional breakdowns by vessel length are included in the stats, to reflect the different impacts coronavirus is having across the fleet.

Peterhead remained the UK’s fishing port where landings of 13,110 tonnes were offloaded earning worth £6.4 million. Ullapool followed Peterhead on the landings chart with 1,129 tonnes landed earning £1.9m. Fraserburgh was next where 970t made £2.0m, Scrabster had 963t for 1.9m and Newlyn saw 943t for £2.1m.

When examining the period January to March 2020, the only increase by the UK fleet was in Mackerel landings which were 56% higher than the same period in 2019; from 65,000 tonnes in 2019 to 101,000 tonnes this year over the same period. Even with the increase in landings, the value of mackerel landings did not increase so steeply, up 38% compared to 2019. This increase in the volume landed is due to the increased mackerel TAC in 2020.

Shellfish took the hardest hits out of all the fish stock during the first quarter with Crab dropping -54%, Nephrops -37% and Scallops -31%. Overall, shellfish landings fell -26%, down to 19,438 tonnes, which meant a loss in value of -35%; approximately £47.2m.  This was mainly due initially to the closure of the markets in east Asia and as the coronavirus hit Europe, important continental markets like Italy folded due to the impact the virus and the consequential lockdown that followed.

Although markets have seen signs of reopening in places like China, transportation to these markets remain an issue as many of the logistical companies have closed due to social-distancing protocols and the lack to airfreight to be transported.

Read more on the statistics here.

Source: Fisheries Administrations in the UK 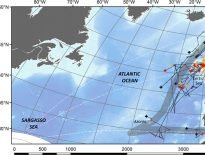