The Sea-Fisheries Protection Authority has made an application to the EU Commission for an extension of the use of the current control plan.

The news comes after the SFPA met with recognised fish producer organisations and the Irish Fish Processors and Exporters Association (IFPEA) yesterday (Wednesday 13 April) as part of an ongoing dialogue relating to the EU Commission approved interim Fisheries Control Plan.

The interim Control Plan enables 95% of bulk landings of pelagic fish to avail of an exemption to weigh-after-transport, meaning that just 5% are subject to supervised weighing on landing. But has proved controversial over the past two weeks or so in Killybegs.

Claims were made local fish processors that bulk pelagic fish landings from foreign vessels, mainly two vessels from Denmark and Norway respectively, were targeted by SFPA inspectors for dry-weighing monitoring in a series of events which saw the two vessels carrying three loads of blue whiting assigned for human consumption leave the harbour without landing. A number of Irish boats were also targeted, and their catches were sent for fish meal processing rather than human consumption.

The result of this was the factories processing the fish for human consumption had to send workers home. One vessel, the Norwegian trawler, Ingrid Majala, travelled to the Port of Derry to unload it’s two catches of blue whiting, causing considerable expense to the two processors who had to transport the blue whiting back to Killybegs. Sean Óg Ward from Ward Fish, told The Fishing Daily that continuing fish processing in the town was becoming financially unviable, and they could be forced to close.

A meeting on Saturday 09 April heard from local fish producers, fish processors and local businesses on the impact which the current actions were having on the economy of Killybegs and southwest Donegal.

Minister for Agriculture, Food and the Marine, Charlie McConalogue who attended the meeting said that it was not his place to interfere in the operations of the SFPA but encouraged the local fishing industry to sit down and converse with the state body.

Yesterday at 2.00pm the SFPA held a meeting with the IFPEA, IFPO and the KFO to discuss the recent controversy surrounding the interim Control Plan and how the SFPA was implementing it.

After the meeting, Brendan Byrne, CEO of the IFPEA said, “The IFPEA are satisfied that following today’s lengthy meeting that a system of weighing fish can be put in place, that both accurately weighs fish and preserves the quality of the fish landing, it is envisaged that the pier side weighing system will be central to the outcome of the eventual arrangement.

“Meantime, a process must be entered into and that will take time, but we as an association are satisfied that the certainty required for fish processing and landings into Killybegs can be achieved within this process in the short time ahead.”

Pathway emerges to resolving the weighing issues in Killybegs – IFPEA 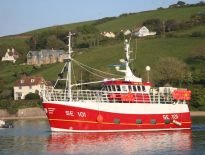 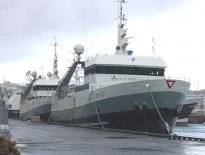