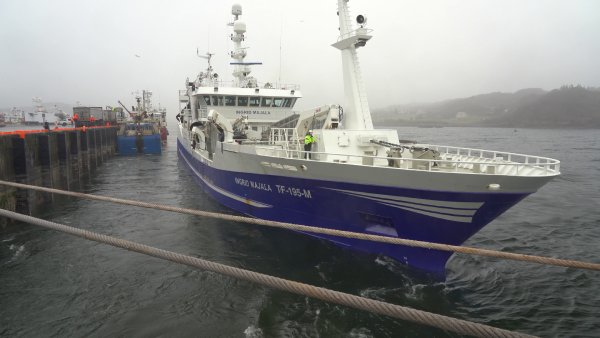 The SFPA issues a statement on the blue whiting weighing incident which led to a Norwegian trawler to leave Killybegs without unloading. Photo: Alan Hennigan

The SFPA has issued a statement in order to clarify the circumstances surrounding the situation which led to the Norwegian trawler Ingrid Majala leaving Killybegs without unloading blue whiting which was destined for local fish processors.

In their statement the SFPA says:

“The Sea-Fisheries Protection Authority (SFPA) wishes to clarify information with regard to recent control inspections which include supervising the weighing before transport of bulk Pelagic landings.

The other 95% of bulk landings of Pelagic fish – an estimated 570 landings annually – can avail of the exemption of weighing of fishery products after transport in Ireland secured under the interim Fisheries Control Plan. Several bulk pelagic vessels which docked in Killybegs harbour over the past week availed of this exemption.

The interim fisheries Control Plan seeks to ensure control systems are adequate to address significant concerns expressed by the EU Commission regarding inaccurate weighing of catches, particularly by operators landing bulk pelagic catches to Ireland, which resulted in the EU Commission’s revoking of Ireland’s weighing-after-transport Control Plan in April 2021. It facilitates the weighing of 95% of all bulk pelagic and demersal landings in Ireland after transport, in fish factories and processing units. In the absence of a Control Plan agreed with the European Commission, all 20,000 pelagic and demersal* landings would be required to be weighed on landing rather than after transport.

Comprehensive engagement has been undertaken with industry over recent months to ensure they are informed as to the requirements and specifications of the interim fisheries Control Plan. This plan is available on the SFPA website https://www.sfpa.ie/What-We-Do/Sea-Fisheries-Information/Weighing-of-Fishery-Products

To meet the requirements of the Interim Control Plan, operators may select one of two options for conducting this weighing before transport: Water in Tare Weight and Water in Nett Weight. To preserve the quality of the catch, fish are in water when weighed in both options. For absolute clarity there is no requirement in either instance for the fish to be weighed dry. Vessel masters and operators in Killybegs can avail of an industry-owned pierside device to separate water from fish as it exits the vessel before discharging directly into a tanker pre-filled with water which is then weighed on the weighbridge (Water in Tare Weight). Alternatively, the fish can be weighed on the weighbridge without using the industry-owned pierside device (Water in Nett Weight).

* Pelagic fish is a term referring to shoaling migratory oily fish which swim in the middle of the water column, including Mackerel, Horse Mackerel, Herring or Blue Whiting.  Demersal fish refers to bottom-dwelling whitefish with a habitat on the continental-shelf seabed such as Cod, Hake, Whiting or Monkfish.

Pelagic fish are stored onboard fishing vessels in bulk tanks and pumped ashore in bulk quantities. Demersal fish are typically sorted by species and gutted then iced and boxed onboard. Verification of quantity and species is significantly more challenging for bulk pelagic than traditional boxed demersal catches.

A formal Control Plan to enable the derogation of weighing of fishery products after transport in Ireland was submitted to the European Commission in March 2022. 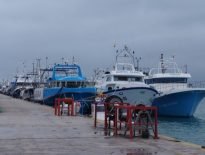 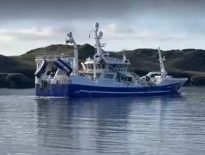