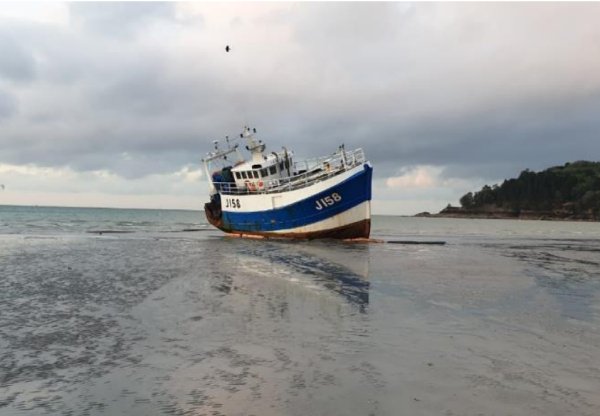 The L’Ecume after her grounding on the beach in Belcroute Bay, Jersey Island. Photo: Ports of Jersey

The Ports of Jersey investigation into the grounding of the 18.5m L’ECUME II J158, at Belcroute Bay on 14 May 2020 has been published.

The 66-tonnes Jersey-registered wooden trawler was making her way to St Helier after unloading a catch in Granville (France) with two crew members onboard when it grounded at Belcroute Bay, to the South West of Saint Aubin’s Fort on the south Coast of Jersey after the deckhand on watch had fallen asleep.

The incident happened around 02.50 BST in the morning and when L’ECUME II grounded the tide was falling, therefore it was not possible to re-float the boat immediately. There were concerns at the time with respect to the vessel not remaining upright as the tide ebbed. Once the vessel had been made safe the crew were evacuated by the Saint Helier Inshore Lifeboat (SHILB) and then subsequently transferred to the Fire Service Inshore Rescue Boat Fire Alpha Marine (FAM) for landing ashore at 04.51 local time.

The L’ECUME II is one of the largest boats in the Jersey Island fishing fleet. The skipper and one crewman had been at sea 42 hours and after landing their catch in Granville, were forced to leave immediately due to COVID-19 regulations operating in the harbour.

The fishing trip started on 12 May, when the l’Ecume left St Helier at 07.10. The L’ECUME II was certificated for operation with up to four crew but the size of the crew appropriate for a particular voyage is left to the assessment of the owner.

Fishing commenced on 12 May at 09.20 BST to the west of Jersey and continued East of Sark and off the North and East coasts of Jersey until 13 May at 17.20 local time when course was set for the French port of Granville where the catch would be discharged.

The skipper reports having experienced problems in the past with receiving Jersey Coast Guard transmissions on Channel 82 whilst in the vicinity of Granville, no ETA was sent from the vessel on departure on this occasion. Once clear of the port the deckhand prepared sandwiches for both himself and the skipper.

No formal passage plan had been produced for the voyage from Granville to Jersey for loading into the chart plotter as the skipper did not consider it necessary. There was no audible off-track alarm facility on the chart plotter. The echo sounder audible alarm was not set. At 2345 BST on 13 May, with the vessel East of the French Chausey islands, the master handed over the bridge watch to the deckhand who had confirmed that he felt sufficiently rested to take over the watch, which the skipper believed to be correct. The skipper had told the deckhand to maintain a good lookout and to call him immediately if in any doubt and in any event to call him 20 minutes before arrival in St Helier. The skipper then retired to his cabin below to rest. The deckhand recollects making an adjustment of course when NE of Les Minquiers to shape course for St Helier and the vessel track is shown to be substantially consistent with following the South East Passage approach to Saint Helier. During his time on watch the deckhand briefly conducted rounds of the engine room, pump room, accommodation and fish room leaving the bridge temporarily unattended. Returning to the bridge, the deckahnd made himself a cup of tea and self-administered two painkillers as he was suffering from back pain. He noticed that the vessel had four miles to run (31 minutes at the vessels speed of just over 8 knots) to arrival position off the port.

Seating himself in the bridge chair the deckhand then watched “a few YouTube videos”, he last recalled being that there were 28 minutes to run. His next recollection was waking up on the wheelhouse deck adjacent to the heater after the vessel had run aground.

The investigation found that the L’ECUME II had ran aground because the deckhand had fallen asleep while the vessel was just under four nautical mies from the approaches of St Helier. The vessel’s autopilot was in operation and the vessel maintained a steady course and speed until the point of grounding. It also found that the deckhand more than likely fell asleep due to fatigue along with contributing factors.

The investigation found that the next periodic inspection for the vessel was in June 2020 but a spot check in 2019 revealed only minor issues but find that the vessel was not fitted with a Bridge Navigation and Watchkeeping Alarm System (BNWAS) as there was no requirement to retrofit such equipment to vessels of her age.

The only damage sustained by L’ECUME II as a result of the grounding was minor distortion to the rudder fixings which limited the port helm to 10 degrees. There was no water ingress and no pollution. By 21 May 2020 the rudder damage had been repaired to the satisfaction of the Certifying Authority and the vessel was cleared to resume fishing operations until the next scheduled intermediate inspection in June 2020. 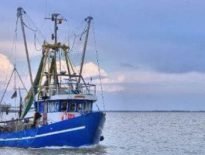 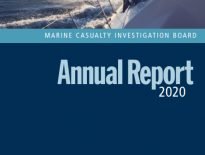