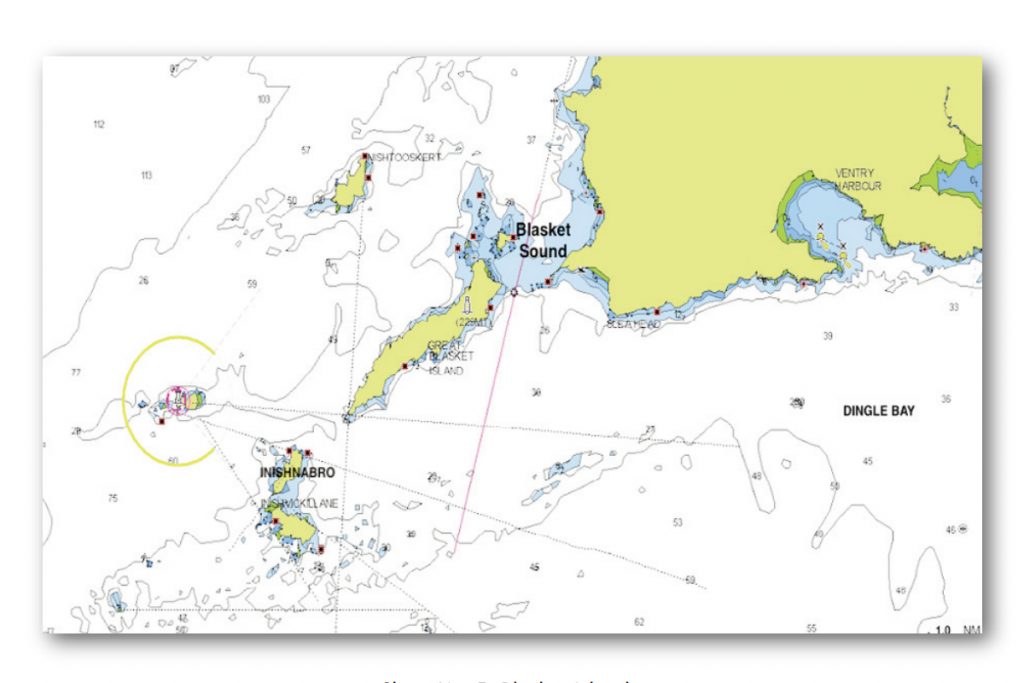 The Marine Casualty Investigation Board (MCIB) has presented its report into an incident involving the FV Dearbhla DA 55 at the Blaskets, Co Kerry on 14 May 2020.

At approximately 04:10 hours (hrs) on the morning of 14 May 2020 whilst on passage from Rossaveel, Co. Galway to Howth, Co. Dublin, the 23-metre fishing vessel with five crew onboard, struck rocks at the north west peninsula of the island of Inish na Bró in the Blaskets archipelago off the coast of Co. Kerry.

After the initial impact the vessel was able to manoeuvre to deeper water and the crew investigated the extent of the damage. The crew were unharmed but their investigations for damage found that there was heavy contact damage to the vessel’s bows. They found no water ingress below the water line. The emergency services were not informed of the grounding and the vessel continued its voyage to Howth.

The vessel’s owner was informed of the incident at approximately 08:00 hrs that day. The owner arranged for the vessel to proceed to Castletownbere for an inspection of the damage and repairs. The inspection revealed that the vessel had considerable contact damage to its stem at the waterline and was holed above the waterline under the bows.

The vessel’s owner was informed of the incident at approximately 08:00 hrs that day. The owner arranged for the vessel to proceed to Castletownbere for an inspection of the damage and repairs. The inspection revealed that the vessel had considerable contact damage to its stem at the waterline and was holed above the waterline under the bows.

The FV Dearbhla had left Rossaveel at approximately 18.00hrs on 13 May. On board were five crew including the skipper, who was the only crew member who was not permanent and was only taking charge of the vessel for this one trip. The Skipper navigated the vessel out of Rossaveel Harbour and made passage through Gregory Sound in the Aran islands and then made course of 210 degrees (0) for the Blaskets, a distance of approximately 70 NM.

At 03:00hrs the vessel was estimated to be approximately northwest of Sybil Point when the skipper call a crew member to take over the watch. The Skipper gave the crew member instructions to change course in order to proceed through Blasket Sound. Weather was good with good visibility and moderate swell. The Skipper retired to his bunk for rest before the course change was made.

Shortly after taking over the watch Crewmember ‘A’ went down to the tea station in the crew mess to make a cup of tea. Before leaving the wheelhouse, the crew member switched ‘OFF’ the ‘Watchkeeper Alarm’, a timer device designed to give an audible sound in the wheelhouse every ten minutes. The device’s function is to ensure the watchkeeper remains alert and in the wheelhouse. He had switched off the alarm in order not to awaken the crew id he was delayed in making the tea.

After making the tea, the crew member returned to the wheelhouse to resume the watch but forgot to switch ‘ON’ the alarm and shortly afterwards fell asleep, claims the report.

The vessel was now on autopilot and the course remained unchanged. The watchkeeper had made no course change to Blasket Sound.

At approximately 08:00 hrs the Skipper contacted the owner. The owner was informed of the incident and given details of the damage to the vessel. The vessel continued its voyage to Howth while the owner attempted to find a shipyard able to carry out repairs. The owner stated that enquiries were protracted before a yard in Berehaven was found to be available to take the fishing vessel in at short notice. The vessel was re-routed to Berehaven for inspection and damage assessment at Bere Island Boatyard. The vessel arrived at the repair yard at approximately 09:00 hrs on the 15th May. The owner viewed the extent of the damage and contacted the vessel’s insurance company at 10:00 hrs. 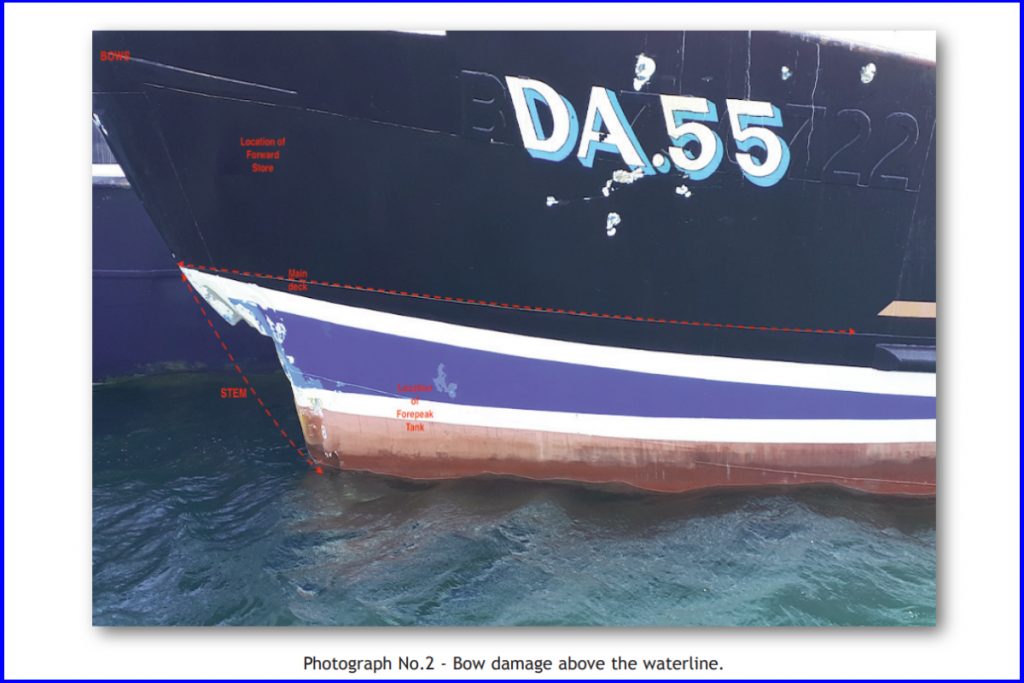 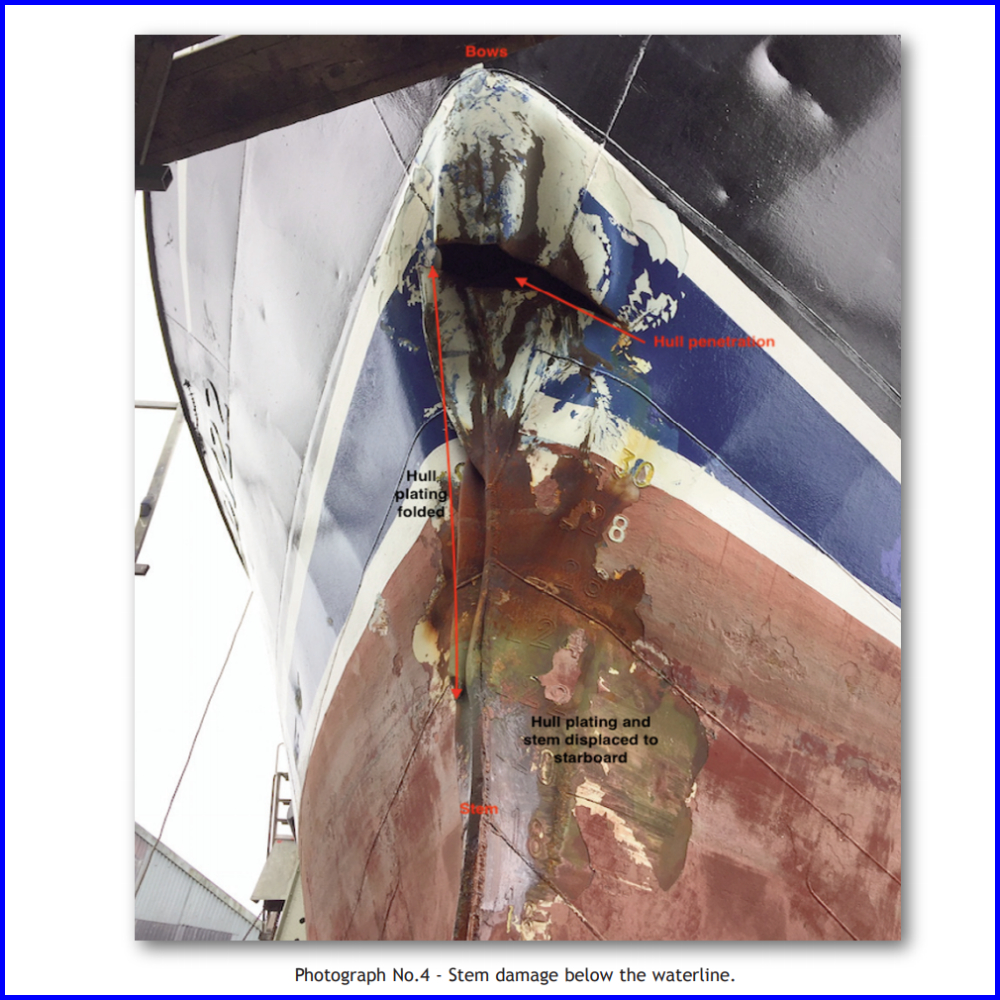 Damage found to the bows and stem was extensive. The hull plating was ruptured above the waterline and internal frames, beams, brackets and floors in the forepeak tank were deformed and buckled. The deck in the forward store was buckled. There was evidence of hard contact along the starboard chine and on the leading edge of the bilge keel.

The vessel was also inspected by a Surveyor of the MSO and detained on the grounds of the damage to the bow and stem and expired certification.

The safety recommendations from the report suggests The Minister for Transport should remind owners and operators of fishing vessels of the following requirements:

‘102. (1) Owners shall ensure that their vessels are operated without endangering the safety and health of the crew.

(2) The crew shall be given training and instructions on health and safety matters on board fishing vessels, and, in particular on accident prevention.’

‘23. (1) An owner, charterer, master, Skipper, person in charge, ships agent, ships manager or ships husband of a vessel involved in a marine casualty shall, by using the quickest feasible means, notify the Chief Surveyor or any other marine surveyor in the Marine Survey Office of the Department of the Marine and Natural Resources of the casualty immediately he or she is aware that the marine casualty has occurred or commenced, as soon as practicable thereafter.’

The Minister for Transport should issue a Marine Notice:

The full MCIB report can be read here. 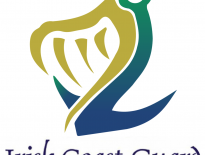 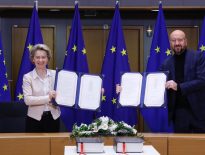