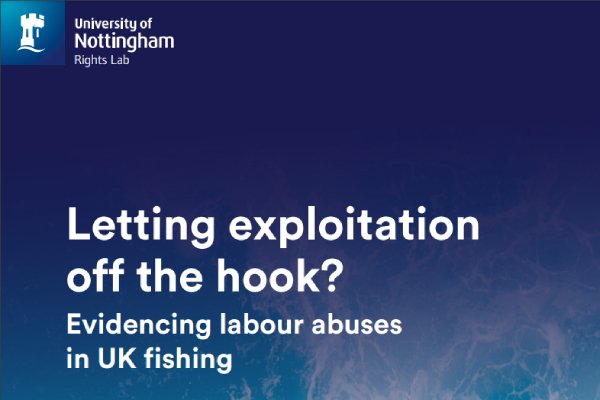 The ‘Letting Exploitation off the Hook?’ report into how fishermen are treated in the UK fishing industry, concocts a very cynical and often divisive view of how migrant workers are treated by their employers in the sector.

Some of the accusations the report from the University of Nottingham Rights Lab make include:

The nature of fishing is rough and tough, but anyone in the industry will tell you there is no place for abusing crew no matter where they are from. The problems with pay, working hours, etc, spans from poor regulation from the Government that allows loopholes for exploitation starting with the Transit Visa system for non-European migrants, something the report highlights. It says:

“First, despite fishing crew being eligible for skilled-worker visas, there is no evidence of non-European (non-EEA) migrants working on these skilled-worker visas. Instead, non-EEA migrants continue to enter the UK through the use of transit visas which exploits a lack of legal clarity in UK immigration law. As a result, migrant fishers are required to work a “majority” of their time beyond the 12 nautical mile boundary (although this is not quantified or explained and is therefore open to interpretation, which makes enforcement difficult) and have no legal authority to “enter” the UK when returning to port following their 1st fishing trip and repeatedly thereafter during their 10-12 month contract. As a result, they are forced to live on board the vessels, creating multiple employment dependencies that can be readily exploited by vessel owners.

“Additionally, vessel owners and recruitment agencies are issuing fishermen’s work agreements (FWAs) that are non-complaint with ILO C188. In practice this means migrant fishers are unduly treated as violators of UK immigration law even when other parties are responsible for the illegal nature of their migration, recruitment, and work. As a result, they are intimidated and prevented from seeking help, can be denied access to medical care and insurance if injured or compensation for the family if killed, and can be denied the right to repatriation if “caught.” Furthermore, 18% of migrant fishers reported being forced to work on a vessel not named in their contract. Because the transit visa scheme ties them to the one vessel named in their contract, when this situation occurs, migrant fishers are again in violation of immigration laws through no fault of their own.”

Some of the findings from the report:

30% reported that they never received 10 hours of rest

Most migrant fishers surveyed also reported working excessive hours in violation of ILO C188 with pay substantially less than domestic and EEA fishers. For example, 60% reported working a minimum of 16 hours per shift and 1/3 reported working more than 20 hours per shift. Additionally, 30% reported that they never received 10 hours of rest. Because they are required to stay on board the vessel while in port, another 25% reported that they never receive 77 hours of rest in a 7-day period because they are required to clean and repair the vessel, take the gear off the vessel, or mend nets on their days “off” in port. Non-EEA migrant fishers reported making as little as £400 per month and up to £1,500 per month with only a select few stating they receive catch-based cash bonuses. The average amount of debt incurred to work in the UK was approximately £1,800 despite ILO C188 prohibiting fishers from incurring placement fees. When accounting for monthly salary, debt, catch-based bonuses, and average hours of work (excluding informal port work), the average salary for migrant fishers was equivalent to £3.51 per hour.

In addition to this systemic overworking and underpaying, 35% of fishers reported experiencing regular physical violence. Multiple narratives of extreme violence also emerged, with one fisher describing being beaten while the skipper’s son yelled racial slurs and two fishers reported graphic and extreme sexually violent acts. Coding interviews and survey responses against the ILO’s two core dimensions of forced labour (involuntary work and threat or menace of penalty), almost 19% of participants reported probable forced and compulsory labour while an additional 48% reported potential cases of forced and compulsory labour. Compounding these issues are the isolation of migrant fishers on board vessels and the insular nature of the UK fishing industry, resulting in migrant fishers not knowing who to trust. There was no clear consensus on a trusted entity for reporting a grievance to, and more than 60% stated they would never report a grievance out of fear of reprisal through their own blacklisting or the blacklisting of their families.

More than 60% stated they would never report a grievance

As a result, there is a real need for greater workerdriven processes to combat these issues as it is evident legislation alone will not solve the problem. Each regulatory body appears to be using different legislation with little intersection or coordination across agencies. Even with improved regulatory coordination, migrant fishers are still likely to bear the onus for initiating reporting processes since they rarely leave the vessel or port area, and few authorities have the ability to board the vessel unless the case is reported and is deemed to be sufficiently severe. Migrants must also balance the tension between poor working conditions and their future prospects of fishing in the UK, as there is risk that if they are found to have an illegal contract, even through no fault of their own, it will be treated as an immigration violation, and they will be unable to return to the UK for work for five years. ILO C188 delineates responsibilities for regulatory bodies, vessel owners, and skipper, but it is evident these requirements are not being implemented correctly across UK fishing. Consequently, this poor implementation is enabling the continued exploitation of migrant labour on UK fishing vessels.

In the conclusion of the report, they researchers say:

There is a critical need to stop pre-supposing that labour abuses and forced labour only happen in fisheries outside of UK borders as this study presents compelling evidence that exploitative labour practices and forced labour are endemic across the UK fishing industry. These practices are compounded by ambiguous laws that are often interpreted differently by different actors. As a result, even if migrant fishers are threatened with false information, they have no frame of reference to challenge this misinformation or assurance to ignore the threat. As a result, a suite of complimentary interventions is urgently needed to achieve far-reaching change as the issues and their drivers are diverse, ranging from fundamental faults in the structure of a UK maritime immigration loophole to interpersonal violence predicated on racism and discrimination. Without immediate change, the UK will continue to fail to meet its obligations and responsibilities under both international (ILO C188) and domestic law (Modern Slavery Act), but most importantly will continue to perpetuate inequalities between migrant and domestic fishers. The exploitation of migrant fishers not only hurts those individual fishers, but also creates an unfair competitive advantage that rewards operators skirting laws and regulations, ultimately flattening the success of law-abiding operations and the coastal communities that depend on fisheries the most. Findings from this research should not be used to trivialize, demean, or even vilify the hard work that fishers engage in every day. Instead, it should be used to compel actors across the industry to collaborate to effect real change. Fishing can provide rewarding work for both domestic and migrant fishers across the UK if decent and fair working conditions are assured on all UK fishing vessels.

Read the full 'Letting Exploitation off the Hook? Report here 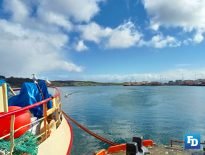 Featured News Controversy at JC as Hayes made to withdraw statem… 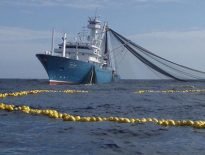