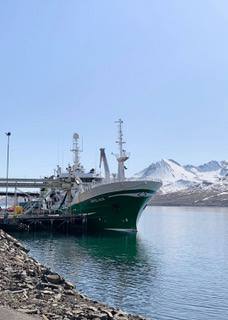 LVF in Iceland has reported that their pelagic fishing vessel, the Hoffell SU 80 is hitting on good mackerel catches in distant waters to the west of Norway.

Sigurður Bjarnason, skipper of Hoffell, has said that it takes a long journey out to find the mackerel, but it had gone well this time with 1000 tons had been caught in just 38 hours.

Last year, fishing stopped on 10 September but in previous years the fishing only lasted until the start of September.

Captain Sigurður said that the fish was all east now. “They are coming from Norwegian jurisdiction and we were catching them at the zonal line,” said the captain.

Sigurður likes the idea of another fishing trip, although he is fully aware that it is a matter of time before the fish goes to the spawning grounds, This usually happens in the autumn based on previous years experience but this year it seems to have happened earlier than in previous years.

The skipper reported good weather on this last trip, however, a cold spell came when Hoffell was pulling in the last haul but it improved tonight as the journey progressed homewards.

Hoffell landed in its home port at 19.00 on Sunday 23 August. Unloading began early on Monday morning and the fishing boat is scheduled to return to sea on Wednesday.

Hoffell SU 80 operates 9 crew members when trawling and 11 men using the purse-seine net. The ship was built in 1999 in Poland and finished in Norway. The vessel is 68.1 metres long and 12.6 metres wide.

The Hoffel’s catches pelagic fish for both human consumption and use in the fish meal/oil processing plant. 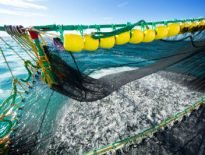 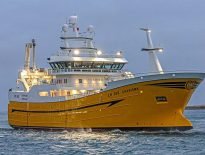