Return of the Scallop Wars? - UPDATE. Confrontation between French & British boats off the Normandy coast. Footage from two Brixham boats appears to show French boats obstructing British scallopers, firing a flare at them & escorting them out of the Baie de Seine. @BBCSpotlight pic.twitter.com/SirE6X0oqw

The video has emerged from two Brixham boats which appears to show French fishing craft obstructing the UK-registered scallop dredgers who were operating in the Baie de Seine. The French boats fired a flare at the English trawlers and escorted them out of the area.

In August 2018 there were major clashes between French and UK-registered scallop dredgers. French fishers were seen throwing stones, shouting insults and carrying out dangerous manoeuvres. The British were heavily outnumbered by their French counterparts who had around 35 fishing vessels and at that time were driven from the scallop-rich waters of the Baie de Seine even though the UK vessels were reportedly operating more than 12 nautical miles out from the French coast where they were legally allowed to fish all year round.

The incidents recorded this week are just another in what has been years of unrest and distrust between the two nations fishing fleets who share the English Channel scallop fishery.

The clashes usually centre around the issue that sees the French scallop fleet restricted to fishing the prized shellfish from 01 October to the middle of May each year but tensions are running high this year between the two neighbouring nations over Brexit.

The French fishing fleet is set to lose a massive chunk of fishing grounds on 01 January 2021 if there is a no-deal crash-out between the UK and the EU and this has increased anxiety levels with fishers there. 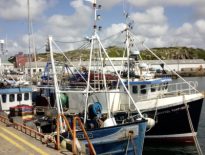 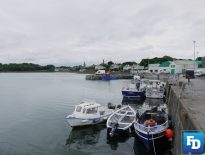