The Faroe Islands have been accused of supporting the Russian war effort in the Ukraine as they continue to licence Russian ships to fish for blue whiting in the Special Area which lies off the north coast of Scotland and to the west of the Shetland Islands.

At least five Russian registered ships have been counted fishing in the Special Area, something which has caused consternation in fishing circles and in political alike.

Under the Protocol of the Forty Fifth Session in the joint Faroese-Russian Fisheries Commission held in November 2021, the Faroe Islands has granted permission for Russian vessels to fish a quota of 75,000 tonnes of blue whiting along with a balance of 5,565 tonnes carried over from 2021. Russian vessels are granted access to the Faroese Fishing Zone in 2022 to fish up to 25% of the quota of blue whiting, (13,959 tonnes), allocated to Russia in the NEAFC Regulatory Area for 2022. In exchange for this, the Russian authorities will allow Faroese fishing vessels to catch, cod, haddock, flatfish and bycatches of other species in the Russian Exclusive Economic Zone.

Under a series of international agreements, the UK and the Faroe Islands both have fisheries jurisdiction over a small area – the Special Area – between the two countries, but the agreements allow for third party countries to fish quota allocated to them by the signatory parties.

Britain itself does not have any Russian vessels licenced to fish in the UK EEZ, and as part of the kingdom’s sanctions against Russia over the invasion of Ukraine, the government has banned all Russian vessels from landing in domestic ports.

The Faroese decision to continue to allow the Russian ships to fish under licence is not illegal but many in the industry feel that there should be pressure put on the Islands’ authorities to revoke the licences they issued to the Russian fleet.

Ian Gatt, CEO of the Scottish Pelagic Fishermen’s Association criticised the Faroese government for allowing the Russian fleet to fish with impunity. He told The Fishing Daily:

“The Association had pre warned both the UK and Scottish governments that it was likely that Faroe Islands would grant licences to the Russian fleet to fish blue whiting in the “special area”; and this has indeed happened.  As far as Faroe Islands is concerned its business as usual with Russia.  The Russian fleet is being fully services by Faroe Islands, including re-fuelling and the ability to tranship catches to reefers. The proceeds of this fishery will further fuel the war effort by the Kremlin.  This is a deplorable action by Faroe Islands to continue this relationship with Russia while we watch the atrocities in Ukraine.  Thousands of Ukrainian people fleeing for their lives, homes bombed to rubble, and the enormous death tally of innocent civilians is clearly not registering on the Faroe Islands radar.  The Association recognises that both UK and Scottish governments have been working through diplomatic routes to try and dissuade Faroe Islands licensing Russian vessels to fish in what is mostly UK waters – but this has failed.  It’s imperative that the UK now revisits its fishery relationship with Faroe Islands.”

Alistair Carmichael, Liberal Democrat MP for Orkney and Shetland also voiced frustrations with the current situation. He told our editor:

“People across the Northern Isles came together at the start of Putin’s invasion to make it clear that we did not want any part in sustaining his murderous regime economically. Through protests and political pressure, we secured a swift commitment from the government to bar Russian owned and operated vessels from making use of our ports.

“It is frustrating, therefore, that Russian fishing vessels continue to operate just off our shores as a result of licences given by the Faroese government. The Faroese are entirely within their right to issue licences and we of course recognise that revoking those permits would not be a cost-free exercise for them. Even so I hope that our northern neighbours will think again about this open access and consider what steps we can all take to cut off further funds from Putin’s war machine and I will be seeking a meeting with the fisheries minister to discuss this further.”

The Fishing Daily asked Defra their position on the Faroese continuing to allow Russian ships fish in the Special Area. A Government source said:

“The Faroe Islands must take a tougher stance on this. Allowing Russian vessels access to an area worth around £16 million in the midst of the horrors we are seeing in Ukraine is simply wrong.

“We, alongside our allies and partners, have taken urgent action to maximise damage to Putin’s war machine and degrade the Russian economy for years to come. We will categorically not license any Russian flagged vessels to fish anywhere in UK waters, and we will continue to urge the Faroes to follow our lead, ban these vessels, and do what is ultimately the right thing to do.”

The Fishing Daily contacted The Fisheries Council in the Faroe Islands but so far has received no response to the questions put to them on the issue. 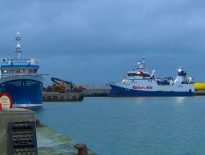 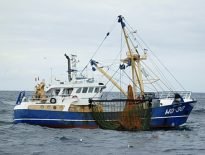