Gardaí are investigating the alleged false imprisonment of fisheries officers off the coast of Co Mayo last week which has seen an explosion of illegal activity since the start of the COVID-19 crisis.

The incident was reported to have occurred as two officers from Inland Fisheries Ireland (IFI) were investigating intelligence on salmon poaching in the area.

According to Francis O’Donnell, Regional Director of the IFI, salmon poaching has seen a huge increase during the COVID-19 crisis in Ireland.

It is understood that the episode happened on Wednesday night (15 July) when two IFI officers boarded a boat that was under suspicion of using illegal fishing gear for the use of catching salmon. Once on board the vessel, it was alleged by two other officers involved in the operation, that their colleagues were taken out to sea against their will.

Mr O’Donnell told the Irish Times yesterday that while drift net fishing for salmon had been outlawed in 2007, 1.5km of illegal drift net was seized off Inishbofin in just one case last Wednesday.

Sean Long, another IFI director based in the South Western Regional Basin, told the newspaper that so far this year his staff had seized 50 percent more nets than for the whole of 2019.

The reason for the marked increase in salmon poaching is due to the lucrative underground market with poached wild salmon fetching anything up to €50.

Mr Long pointed out that although it was a lucrative trade, he warned that it was posing a serious risk to salmon stocks, already so severely depleted that some rivers are closed to anglers.

He stressed that it was illegal for anyone to buy untagged salmon from an unlicensed operator.

IFI bosses believe it is no coincidence that seizures have soared since the coronavirus crisis began, both because their patrols were initially restricted and also because poachers who were not working “had more time on their hands”. 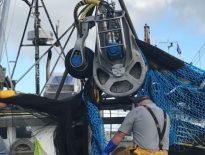