The EAPO and Europêche has called for a precautionary approach and halt the current expansion of offshore wind farms until research has come up with answers to the many existing knowledge gaps.

The demand for renewable energies has led some environmentalists to believing that the future of electricity generation lies in offshore wind farms whilst other marine environmentalists are campaigning against man-made structures being placed in our seas as the long-term issues of such structures could cause irreversible damage to the natural biodiversity of those waters. Currently, many believe there are too many uncertainties over offshore wind farm developments.

For the fishing industry it causes great concern on three fronts:

Firstly, fishers face the loss of valuable fishing grounds. Planning applications for offshore wind farms are usually sought on fishing grounds that are most profitable. Coupled with the increasing number of marine protected areas (MPAs), fishing vessels are running out of places to fish. Once an offshore wind farm is in place, there is an exclusion limit in place around the site, therefore excluding fishers from their traditional grounds. This also leads to a second problem.

Secondly, the imposition of manmade structures in the marine environment has been shown to change the biodiversity of those areas. Water currents are disrupted, therefore leading to the disturbance of natural feed flows for fish, leading to famine for the native species. Other issues are aliens predatory species moving in around these structures. Eventually this can lead to the mortality of native fish stocks.

Thirdly, with the increasing number of offshore wind farms, MPAs and Highly Protected Marine Areas (HMPAs) areas left for fishing are in danger of becoming overworked, leading to extreme stress of fish stocks in those areas.

In a world that is becoming more reliant on fish as a valuable food source, with little or no understanding of the consequences of offshore wind farms, the idea of governments pressing ahead with such developments can be compared to the US testing of the Atom Bomb in the New Mexico desert in 1945.

On the back of these unknowns, the fishing community in Europe is concerned about the long-term ramifications that the development of offshore wind farms could have on fishing.

In a document called “Fishing industry response to the Offshore Renewable Energy Strategy roadmap and public consultation”, the EAPO and Europêche outlay their concerns:

“EAPO and Europêche take note of the newly published Roadmap of the Offshore Renewable Energy strategy published on the 16th July 2020. This roadmap is a source of great concerns for the European fish producers.

Fishers are guardians of the sea; their way of life depends on the good health of marine ecosystems. They are the stakeholders that know best our oceans and have been out there the longest. However, competing activities and area closures for fishing are growing, from tourism and Marine Protected Areas (MPAs) to oil and gas rigs, offshore wind developments, and aggregate extraction. Around Europe, the spatial pressure is now reaching a point where fishermen risk not being able to operate anymore. This latest strategy is not welcomed as Brexit is looming and – although a status quo for access and fishing opportunities remains the objective – the EU fishing sector fears the reduction of access to hugely important traditional fishing grounds.

With the Offshore Renewable Energy Strategy, the Commission appears to take the same approach as for MPAs in the Biodiversity Strategy: aiming for specific objectives with big figures to reach media headlines without taking into account the full picture of associated consequences. The Roadmap promises a “massive scale up of offshore renewable energy” (p2) by 2030 and 2050. Europêche and EAPO are of the opinion that this methodology is wrong since a “sustainable, fair and respectful” attitude to “other sea space users” (p2) is not pursued. First, to guarantee growth and employment, it is important not to destroy fishing jobs that allow coastal rural families and communities to thrive across Europe.

Second, the environmental impact of renewables is too often unidentified, unassessed, and unacknowledged. The reference to the environmental impacts of offshore renewables on “biodiversity and marine environment” (p2) is appreciated. However, it is paramount to also note that not only the deployment but also the production of offshore renewable energy affects the ecosystems. The latest report from the Commission on the implementation of the Marine Strategy Framework Directive is adamant that renewable energy production is one of the “main activities reported under the MSFD causing physical loss of benthic habitat” 1 (p16). In addition, the report “predicts inevitable effect on marine species and habitats by the unprecedented increase in offshore renewable energy”. Furthermore, the long term effects of a large rollout of offshore projects risks impairing the physical functioning of sea basins (local wind patterns, wave generation, tidal amplitudes, stratification of the water column, dynamics of suspended particles and bedload transport of sediment) as a result of cumulative effects. The potential collateral damages are alarming with “far-reaching consequences for the ecological functioning” 2 and therefore need to be fully assessed.

Third, in order to actually tackle climate change, seafood production needs enough space to be sustainably fished, allowing EU consumers to benefit from this low carbon healthy food. Fishery products are the animal protein with the lowest carbon footprint and the last protein source of totally wild origin. This perfect protein is a huge opportunity for the Green Deal to reach its objectives.

Managing the maritime space sustainably means more than “considering the specific space constraints” (p2). It requires to study each offshore renewable project completely before allowing it instead of setting broad and ambitious goals. Prior integrated socioeconomic and environmental impact assessments are legally required. Compensation for spatial usage should consider unwanted consequences of displacement of activities, whereas the creation of new jobs should not be considered as an equivalent substitution of the current sustainable ones (like in fisheries). In plain words: “Don’t change fishers by windmills”. Besides, for the spatial usage occupied by offshore wind parks, nature compensation areas are requested by nature conservationists, thus a double loss of space for the fishing industry caused by solely one other maritime sector. Apart from the fact that a ‘happy co-existence’ as called by the wind energy sector is far from the reality considering that MS are labelling offshore wind parks as no-take zones for fisheries, huge issues such as navigation hazards and insurance coverage come as an additional burden in achieving such an objective.

Similar to deep sea mining, the EU should follow a precautionary approach and halt the current expansion of offshore wind parks until research has come up with answers to the many existing knowledge gaps. As recognised by the Commission, offshore wind poses risks to marine habitats and ecosystems. The EU needs to set its priorities on sustainable seafood self-sufficiency and sovereignty, even more in light of Covid-19, as energy is comfort.” 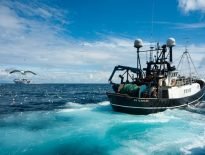 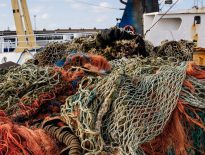