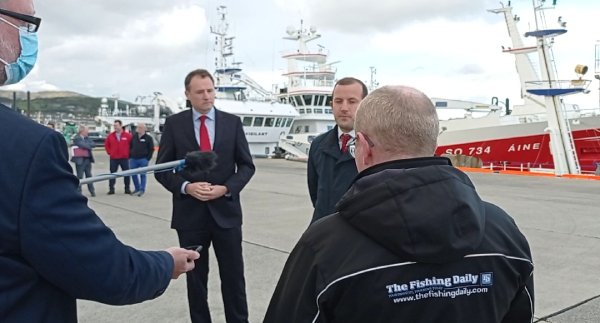 EU Commissioner for Fisheries, Virginijus Sinkevicius held a meeting with representatives from the Irish fishing industry in Killybegs today

EU Commissioner for the Environment, Oceans and Fisheries, Virginijus Sinkevicius today visited Donegal and held a meeting with representatives from the Irish fishing industry in Killybegs.

The Commissioner was accompanied by the Minister for Agriculture, Food and the Marine and local Donegal TD, Charlie McConalogue as he undertook a press conference at the new harbour on the pier.

The Commissioner promised that he would support the Irish position on burden sharing after the dire circumstances the industry was left in post-Brexit and that he was willing to work with the Minister and the industry.

He said, “Of course, Ireland being quite close (to the UK) had a big price to pay but we all have to work together to find how to harmonize and how to find the best way forward for the next generation.”

He referred to the Brexit Adjustment Reserve Fund and that Ireland is receiving the largest part of the funding but also has the greatest flexibility in using the money, but that it is up to the Irish Government to decide how to effectively use it to the help the fishing communities.

He said that he supported the efforts Minister McConalogue was making in finding a way to ease the burden sharing among the Member States but it was up to the Council of Ministers and not him alone as a Commissioner.

On the issue of the review of the Common Fisheries Policy rather than the complete overhaul the Irish fishing community was expecting he said, “Look, let’s do the review first. I think it was tough years for the fishing industry with COVID and Brexit. There was lots of uncertainty, and now to say that we’re going to do a reform on main legislation would I think be too much.

“So, let’s go first to review. Let’s gather a stakeholders, stick with them and see. I think a couple of things which has to play a role is climate change and pollution which also has an effect on stocks.”

He said that of the CFP was only on fishing activities then the fishers would feel that they were being blamed alone for what is happening in the sea. He said the discussion must be broader.

On the issue he concluded by saying “I’m looking forward for a review and then we’ll see if we need a massive change in the CFP.”

On the issue of a new Control Plan being in place by the start of the New Year, the Commissioner said, “I just spoken with the Minister on the matter we will do our best to evaluate it and and return as soon as possible.”

On the issue of the Norwegian government and the unilateral quota they set themselves of 300,000 tonnes, the Commissioner said, “No, that’s a top priority. First of all, two note verbals was issued to Norway. We have regular meetings and discuss it, because absolutely that was unacceptable.

“Of course, they have their interpretation. We see it from a different point, but of course we want to resolve it in a diplomatic manner.

“I think the escalation of the situation is not in the interest of any of the sides.

“It takes time because as you know, Norway just had elections and they will have a new government. And I’m hoping that the new government will be open for a dialogue and finding a landing zone as soon as possible.”

Asked if the delay in the new Common Fisheries Policy promised in 2022 will mean a deeper review of the Irish situation, he said, “We’ll do a review. Of course, we will evaluate all bases. We will evaluate all changes inevitably.

“Brexit will have to be taken into account, but as I said, I don’t want to make it a new form. I don’t want to speak about the reform because the Community, have lived through past two years with very difficult times with lots of uncertainty.

“So, let’s take everything into account. Let’s speak with the stakeholders and then we will present it, and I’m sure you will be the first ones to know if we have further changes planned in CFP but first, let’s do a review.”

When asked if he thought the Commissioner’s visit to Ireland showed that he was listened and concerned about the fishing industry, Minister McConalogue replied

“Yeah, I think it is a big step, but it’s very it’s a unique occasion which doesn’t happen very often when you have the Commissioner of the EU in the fishing port.

“It’s appropriate that he has come to Killybegs here as the centre of our national fisheries sector, and I think, as I said, it’s a reflection of the understanding by the Commissioner of the pressure of this sector coming out of Brexit in particular.

“And also, I think it’s really useful, as you say, for fisher representatives to have that opportunity face to face to discuss these issues with Commissioner, but I think as we move into the fisheries policy review over the coming months it will be a benefit to all to actually have had this visit and have had this have had this discussion.

“Certainly, as I said in terms of the Brexit outcome, there’s a disproportioned impact on our fisheries sector from Brexit in terms of quota and it’s really important that that is recognised as part of the common fisheries policy review and the impact that it has on our fishing sector.” 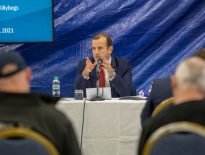 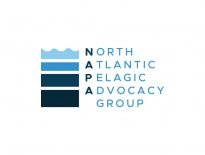 Europe Fishing Industry “Fisheries is a complex world, this decision…
0