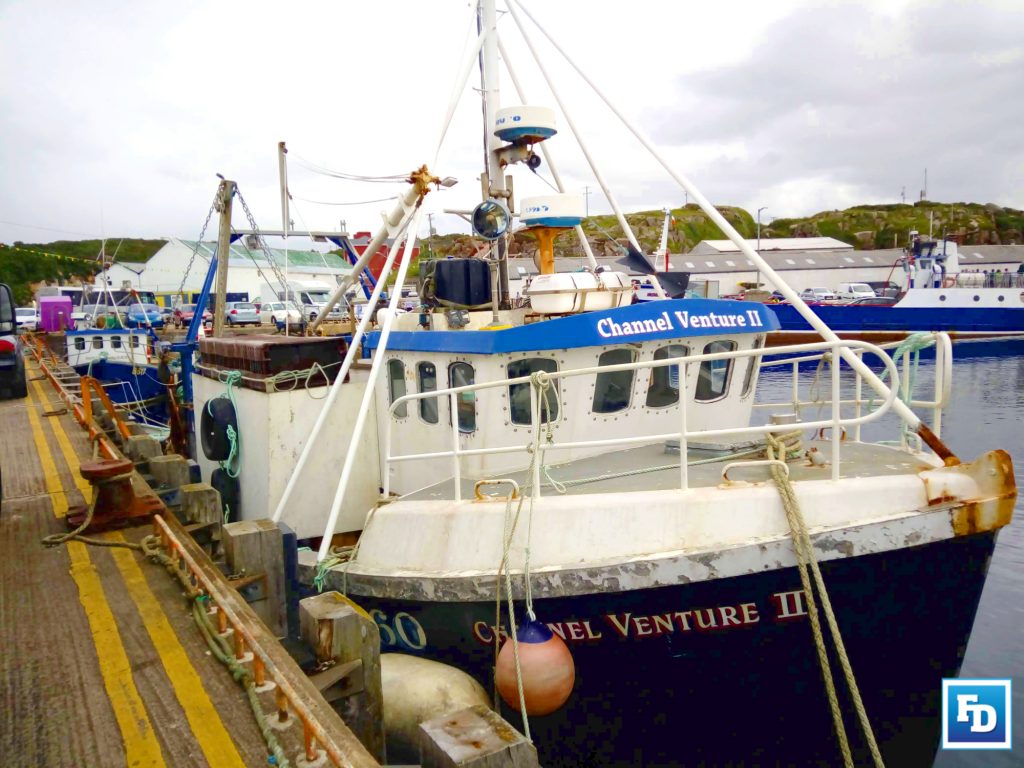 A Donegal based priest, Fr John Joe Duffy has hit out at Minister Charlie McConalogue for only commissioning five extra designated landing ports in Ireland and has again called for the appointment of a dedicated junior minister to the affairs of the fishing industry.

Fr Duffy criticised the subservient role that Ireland has played to EU officials and condemned the double standards that fishermen have to face compared farmers, who can still freely travel over and back the border with Northern Ireland with their goods and produce without being subjected to third country border controls.

In his letter he writes:

“The last-minute dot com (last-minute.com) announcement by the Minister for Agriculture, Food and the Marine, Deputy Charlie Mc Conalogue to designate 5 additional landing ports (in addition to the existing 2) for the 15 coastal counties of the Republic is in stark contrast to the provision made by Northern Ireland who have already designated 7 ports for its 3 coastal counties within Northern Ireland.

The announcement by Minister McConalogue is very far of the mark to what is truly needed for the safety and sustainability of small and inshore Irish fishermen. The greatest success of yesterday’s announcement is the attempt to cover over the cracks that are evident within the Department of Marine, they simply are not fit for purpose and on face value are providing extremely poor advice to the Minister and what is worse the Officials are simply out of their depth at European level.

For too long Irish Marine Officials are playing the role of being subservient to Europe to the point of perfection, bowing and cow-towing to their European masters, a new generation of personnel needs to be brought into the Department, a new generation through their own confidence and ability needs to lead us as equals within Europe.
Yesterday’s announcement is a classic demonstration of a knee-jerk reaction of the Department of Marine and Government to the unacceptable, very dangerous and unworkable situation in which Irish fishermen were plunged by the failure of the Department to engage with the European Commission.

The European Commission DIRECTORATE-GENERAL FOR MARITIME AFFAIRS AND FISHERIES requested from all member states their designation of ports for non-registered European boats in a notice to all stakeholder (coastal countries and Ireland) from Brussels on 17 August 2020, why was this request not acted upon by the Irish Government in advance of the 31st of December 2020? Why did the Department of Marine officials fail to deal with the consequences of this directive because with or without a deal: this was going to be a massive issue.

The designation of ports for LANDING OF FISHERY PRODUCTS IN THE EU in section 3.2.3. for a fishing vessel flying a third country flag are exempted from official controls at border control posts provided that they are performed by competent authorities in Union ports designated by Member States in accordance with Article 5(1) of Regulation (EC) No 1005/2008. (North East Atlantic Fisheries Commission (NEAFC) regulations).

Why did they not anticipate like the Dutch, the French and other European countries, that there was a third category of vessels, Irish owned and Irish based vessels/boats operating under a third country licence, it is this failure on their part that is their greatest blunder.

It is obvious and now very clear that our Government and the Department of the Marine unlike France, the Dutch and Spain, etc failed to see the need to facilitate and failed to engage with Irish based fishermen with Northern Ireland Licences, it clearly demonstrates a lack of knowledge and lack of care for Irish based fishermen and exposes a Department of Marine that is not fit for purpose.

Again, I am calling for a delegated Junior Minister for Fisheries with full powers and for a reshuffle of the Department which for years now needs new blood, thinking fresh for it is clear that the officials are there too long, they are institutionalised that they have nothing more to offer and have overseen the decimation of Irish fishing and coastal communities and the Department in its present form is a monument to the disaster it is and has been for Irish fishing. Other departments help their areas of concern to grow, the Department of Marine throw the Irish fishermen overboard at every opportunity and persecute them. We need a Minister who can concentrate on the Department fully who will know where the bodies are buried and who will gain a good brief by engaging in a wide consultation, independently (without their officials listening) with fisherman and who will not be afraid to make just, fair, rational, good decisions and will learn and know the language of fishing.

It is very clear that a new single focused Minister, with a good knowledge of fisheries is needed and a Minister who will take advice from people who have a good knowledge of fishing outside of the Department. It is evidently and abundantly clear that the Minister for 3 Departments, which is a huge task is getting dire advice because nobody would have ignored the request to designate necessary ports or to find a solution that was workable for over 40 boats in his own county. Dire advice given was abundantly clear when the Minister who together with the Minister for Foreign Affairs, himself a former Marine Minister Simon Coveney welcomed the worst possible and most  disastrous deal for Irish fishermen that will result in a massive losses of our total allowable catch of up to 30% when we should be increasing our catch, to welcome losses of £34 million which we are now told is £43 million and which fishing sources now believe could be as high as £70 million, to preside over a Department that is persecuting the fishermen in Killybegs on untenable and unjust weighing demands on piers, failure to appoint necessary fishing representatives to overhaul the Sea Fisheries Protection Authority (SFPA) which Price Waterhouse Coopers (PWC) states is “not working efficiently and requires urgent attention”, all this clearly shows just how dire the advice that is being received and acted upon.

Unfortunately, it is the case that at some different levels of Government, they seriously believe that a good Brexit deal was reached, recent social media postings by a Donegal Senator claimed the sector were content. Perhaps more than the Department were out of touch when it comes to Marine and Irish fishing.

The Minister for Marine and the Minister for Foreign Affairs and Department of Marine officials have created a hard economic border on the island of Ireland for Fishermen and destroyed the goodwill of the Voisinage agreement (of 1967 between Taoiseach Sean Lemass and Capt Terence O Neill PM NI in 1967 that made legal reciprocal fishing and landing rights in both jurisdictions), of the Good Friday agreement both which guaranteed by law the free movement of boats and landings at all ports in both jurisdictions and failed to make the necessary provisions needed in the Northern Ireland protocol. Why is it that fishermen do not have free movement like Farmers and other Irish and UK citizens on the island of Ireland who many enter into any of the counties in the North or the Republic with their animals, goods and services and have free unhindered movement and access to both jurisdictions. What is the difference between Fishermen and all other Irish citizens? What value is the Northern Ireland Protocol if it excludes the fishing sector?

Donegal and Irish based fishermen bought their licences mainly in Northern Ireland and were offered the good economic opportunity to buy the licences with these boats which was something that was encouraged in order to expanded the Irish share of the European fishing fleet. French, Spanish based boats and more so Dutch based boats hold Irish licences and a huge number of British licences and those from other EU countries.

The failure by the Minister in yesterday’s announcement to better protect the lives and sustainability by the Donegal based Minister but the Clonakilty and Department of Marine Run and Controlled Minister was a missed opportunity by the Minister. If the Minister had properly engaged and had truly sought advice from small fishermen, he would have then realised that you cannot operate on a part time office hours-based Monday to Friday only week at sea. Some Fishermen have been given a 30-hour per week tiny widow of opportunity to operate their now 5 day a week at sea cut from the 7 days which are needed for weather opportunities that they need to fish due to poor weather more often than not throughout the year. Weather may not be good Mon to Friday from 2pm to 8pm. Good weather does not operate Mon to Friday from 2pm to 8pm.

Failure to designate more ports in Co Donegal such as Magheroarty, Malin Head, Glengad fails to resolve the situation for these fishermen who will have to undertake a round journey/voyage of 6 to 7 hours from their home ports to their nearest designated port. What was required in addition to yesterdays announcement, was a non-transferable transition licence, allowing those that had purchased a Northern Ireland Licence or by extension a UK licence but had for the duration of its use by the purchaser/boat owner and or his successors, who has remained domicile and a tax resident in the Republic: in such cases and as a consequence of Brexit, the Irish Government should have granted a transition licence to our citizens. I am calling on the Minister for the Marine to issue such licenses immediately before fishermen get lost at sea. These fishermen were encouraged to expand, they purchased what was a licence you could use within the EU, but the UK decided to leave, the fishermen’s circumstances did not change and as such they need to be accommodated by the Government due to the change of circumstances.

The real Beneficiaries from yesterday announcement are SFPA, fishermen are just an inconvenience to many within this Government and within the Department of Marine. But, meantime regrettably we are getting more of the same, the same old from a Government that fails to understand and is overly dependent on a public service that has destroyed the Irish Fishing industry …. eventually more of the same becomes the end.” 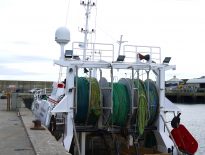 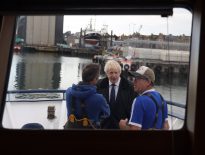