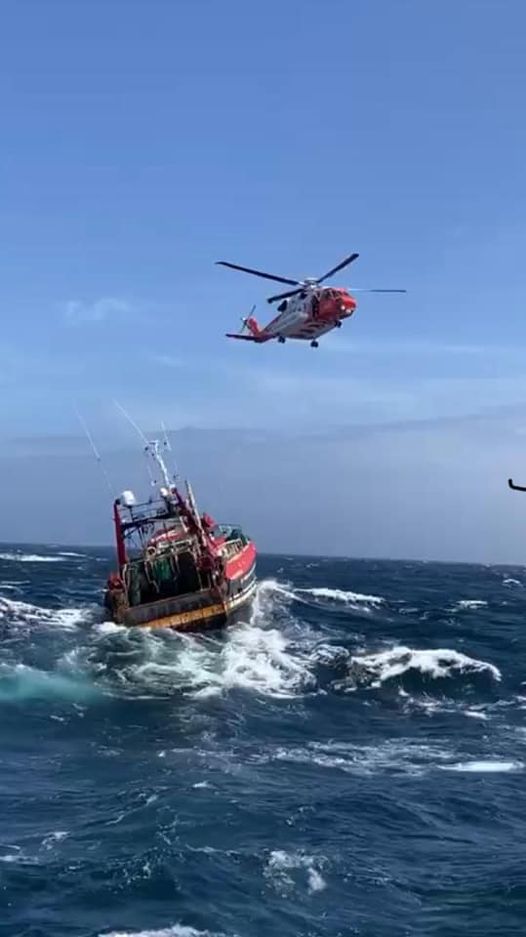 The fishing vessel and the Coastguard Rescue 117 Helicopter, as they drop the emergency salvage pumps and winchman on board the casualty in heavy seas with the Lifeboat standing by. Photo Credit: RNLI/Courtmacsherry

The Courtmacsherry All Weather Trent Class RNLI Lifeboat was called out this morning Sunday at 11am, to go to the aid of a 75 foot Fishing Vessel that had got into difficulties 27 miles off the Old Head of Kinsale in West Cork.

The Courtmacsherry All Weather Lifeboat, Frederick Storey Cockburn under Coxswain Mark Gannon and a crew of 6 were underway from their moorings in the harbour within minutes of being alerted by the Marine Rescue Co-Ordination centre in Valentia and proceeded at full speed to the area of the causality. Conditions at sea today were very difficult with Force 7/8 winds and high sea swells.

The fishing vessel with five crewmembers on board had put out a distress signal when its hull was breached in difficult sea conditions and was taking in water. Also launched was the Coast Guard Rescue 117 Helicopter from Waterford. Just after 12 noon, the Coast Guard Helicopter dropped an emergency salvage pump and winch man on to the fishing vessel deck and the Courtmacsherry Lifeboat readied their emergency salvage pump, and plans were finalised to pump the water from the stricken vessel in order for it to continue being operational. As the Water was pumped from the casualty, the Lifeboat stood by alongside in readiness for evacuation of crew or any other assistance if required.

With the pumping of the water being successful, and the seas very difficult, the Lifeboat escorted the casualty at a safe speed back into the safe surrounds of Kinsale Harbour, arriving just after 4pm. A relieved Fishing Vessel Skipper thanked all the rescue services for their superb help in today’s rescue.

The Courtmacsherry RNLI Lifeboat Deputy Launch Authority and LPO Vincent O Donovan said “Great credit is due to all our volunteer crew members who rushed to answer the callout this morning and headed into very rough seas to help others in distress. Vincent praised both the Coastguard Rescue 117 helicopter crew and the crew of the Lifeboat in carrying out a very professional rescue involving salvage pumps in rough seas and strong winds. 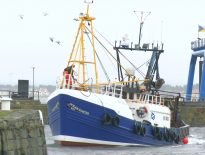 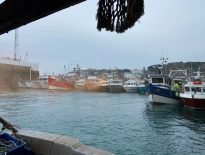