Boat owners in the UK fishing industry have called for clarity on new rules regarding the UK Government’s package of measures for the fishing industry, collectively known as the ‘economic link’.

In a press release on the 27 December last, Defra announced a £75 million “boost” to modernise the UK fishing industry and “level-up” communities. The multimillion-pound investment will see £65 million being invested in infrastructure such as ports and aquaculture, and £10 million pound invested into recruitment and training for the fishing, seafood and aquaculture industries.

The press release also talked about a package of measures, which UK government calls the ‘economic link’. The idea for the ‘economic link’ comes from a consultation Defra ran from 13 October to 10 November 2020. The consultation considered how best to strengthen the economic link licence condition for fishing vessels registered in England and licenced by the Marine Management Organisation.

Under the ‘economic link’ measures, which come into effect on 01 April 2022, the government proposes to increase UK crew members onboard UK-registered fishing vessels to a minimum of 70%, saying that it will create “more job opportunities for UK residents”, and “It will contribute to the financial boost to the local economies in fishing communities”.

In the press release from Defra on 27 December it also states that, “The amount of fish that must be landed in the UK after it is caught will rise from 50 to 70%, meaning more fish being sold and processed in the UK”.

Vessels that do not meet the landing or crewing requirement will be required to donate quota that provides valuable extra fishing opportunities to the inshore fleet. This will be increased from 16.5% to 20% in 2022 and Defra will seek to increase the current threshold over time.

Defra’s press release has led to some confusion with some media outlets reporting that the government is seeking to increase UK crew numbers and increase the volume of fishing being landed into UK ports, but some in the industry believe that this would not be possible if regulations were to be implemented as above.

The UK Government’s plan to increase UK crew numbers on UK fishing vessels to 70% has been met with scepticism by the industry.

Fishing into the Future Chair and joint skipper of the Cornwall-based ‘Crystal Sea’, David Stevens has called on Defra to clarify the situation.

Talking to The Fishing Daily today he said, “We welcome strengthening of the economic link. This is something we long argued for although I think Defra need to clarify the crewing issue.

“Under the consultation, we thought that this 70% crew applied only if you didn’t meet the 70% of landings criteria.

“If 70% of landings into UK are made then UK industry needs to be able to continue with the present crewing situation until we see improvements in local recruitment.

“This can only come from the maritime sector getting a higher profile within careers advice and workable well financed apprenticeship schemes. Something which our industry would warmly welcome.”

The main reason behind the questioning of the government’s plan is the fact that most boat owners in the whitefish and nephrops fleet struggle to man their boats with domestic deckhands and rely heavily on overseas workers.

Over the past two decades, the UK fishing industry has experienced a massive decline in recruitment from the homegrown pool, and now a number of new external factors are also impacting upon young people.

Fishing is no longer fashionable and unless you come from a fishing background, schools, colleges and even the Government is doing very little to show young people that there is a viable career in the industry.

For boatowners like Terry Jack who fishes mainly from Peterhead, the new rules would spell disaster.

Like David, Terry lands mainly into UK ports and doesn’t see a problem there but Terry, like many in the nephrops industry relies on filling his crew numbers with overseas workers and doesn’t believe that many boats in the whitefish sector and his own sector could fulfil the criteria of 70% UK crew requirements.

“I would say the only boats with home crew that I know off in Scotland are up in Shetland,” says Terry. “The rest of the Scottish boats need to take the crew in from abroad. It just seems to be getting more and more impossible for them to be able to get hold of crew domestically.”

Terry described how he has had a settled crew now for six to seven years and he would like to bring onboard another crew member, but he has to recruit from abroad, which has become impossible due to the government’s English language requirements.

Neither does Terry believe that a £10 million recruitment drive will change much for the fishing industry. He says that in the past he has always tried to employ local or domestic fishermen but most that are out there are not interested in full-time employment on the boats and fewer young people are showing an interest in fishing as a career.

“There’s no way that you can employ a bigger percentage of UK crew because they’re non-existent,” says Terry. “Plus, there’s no positive energy for the industry at all and the schools are full of greenwashing, so they’re not educating or informing young people about it. Instead, they are giving a totally false perspective of it.”

If the new regulations were to be implemented as of 01 April 2022 without a grace period, Terry says, “We would be shut down overnight.” 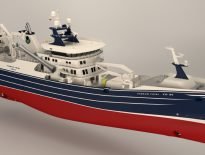 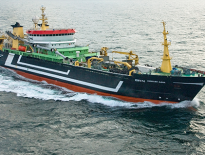